Nathan Yang, a senior at Roslyn High School, has been named a semifinalist in the 2016 Intel Science Talent Search, the nation’s most prestigious research competition for high school students.

Yang’s project explored perceptions of single parents. Having read that in general people have negative stereotypes about single parents, Yang became interested in whether the gender of the parent and the reason they were single (e.g., divorce, by choice) would influence perceptions. Yang recruited over 450 participants online and had them read a one-page vignette about a single working parent with one son. Then, participants evaluated the parents’ competence at work and as a parent as well as the well-being of their child. Interestingly, and contrary to previous work in the field, Yang found no differences in perceptions of the single and married parents, although he did find that single fathers were rated superior to single mothers in terms of both parental and workplace competence.

Yang attributes these unusual findings to his methodology. “Most past studies asked people to come up with adjectives to describe single parents, and these were usually negative,” he said. “I gave people a description of a ‘good’ parent who was struggling to balance the demands of work and family. Providing this information may have made participants less likely to rely on their stereotypes.”

Yang conducted his experiment as part of Roslyn’s Research Program under the guidance of Dr. Allyson Weseley, Coordinator of Secondary Research. “We are all very proud of Nathan,” said Weseley. “He has a great attitude and never was deterred by the obstacles he encountered in the course of his research.”

Being named a semifinalist comes with a $1,000 award for Yang and $1,000 for Roslyn High School. In addition, he has an opportunity to be chosen as one of 40 finalists from among the 300 semifinalists nationwide. 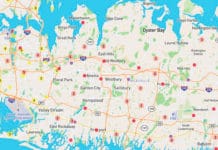