The fifth annual Wounded Warriors concert was recently held at Roslyn High School. The night was a huge success thanks to the efforts of Roslyn Rescue personnel and Mr. and Mrs. Henry Krukowski, raising thousands of dollars. Emil Stucchio hosted the event with a surprise guest appearance by Don K. Reed. The crowd was entertained by the performances of Stan Zizka and the Original Del Satins, Charlie and The Drifters, Shirley Alston Reeves of The Shirelles, plus Bob Miranda and The Happenings. 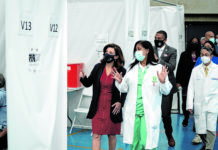