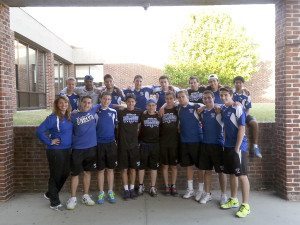 All year long, both the Roslyn High School girls’ softball team and the boys’ tennis team played winning ball. Both advanced to the playoffs with high hopes. Unfortunately, for both teams, defeats in the playoffs brought their exciting seasons to an end.

In the win over Great Neck, the Bulldogs displayed winning tennis in both singles and doubles action. Justin Lempert continued his clutch performances with a win in second singles, while the doubles team of Jake Gans and Justin Princer won a decisive game in third doubles. Roslyn ended the season with a 9-5 record overall and an 8-5 mark in conference play.

Meanwhile, the girls’ softball team saw their own winning season come to an end as they lost to Clarke High School, 11-0, in playoff action. Roslyn went into the playoff season with a full head of steam, defeating South Side, 19-7 and Valley Stream North, 5-4. The defeat marked the end of a number of terrific seasons, including those by Nicole Lang, Kate Kozuch, Sophie Radutzky and Julia Epprecht, among many others.

Now that the season is over for both of these fine teams, The Roslyn News welcomes any news from the parents of these athletes, especially those who are seniors and who have enjoyed standout careers at Roslyn High School. Don’t be shy. We enjoy writing about these student athletes and displaying action photos. Contact Joe Scotchie at 516-747-8282 or email at jscotchie@antonmediagroup.com.