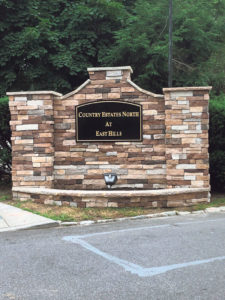 Alexandra Gordon has lived in East Hills her entire life. As with most homeowners, she takes great concern in the well-being of her neighborhood, in case, Northwood Estates. Recently, Gordon became president of its civic association. The East Hills native has big plans. First, the civic association has decided to change its name to Country Estates North. Secondly, it is involved heavily in making the neighborhood “more of a community.” That means a renovated center entrance wall, including more lighting, and most important, new signage to keep this residential neighborhood, which is full of young children, as safe as possible.

A recent article in Newsday, one that failed to mention Northwood Estates, inspired Gordon to take action, she told The Roslyn News.

“We as a civic association discussed with the homeowners about redoing our entrance walls and getting new signage,” Gordon said. “But the new sign would not have our old name. We decided to change our name to Country Estates North. Country Estates’ civic association loved that we were changing our name and having our entrance walls match theirs. This entire project was recently completed about two weeks ago and this is at the entrance of Glen Cove Road and Midwood Cross.”

“Over the past two years we have wanted to become more of a community,” Gordon continued. “I became president of my neighborhood’s Civic Association in 2016. I wanted it to be more organized and wanted to help get projects done. I made sure we were collecting all the dues we could get annually and involve the community as much as possible with decisions by emailing out surveys to take and keeping them informed of what we are planning to do.

“We completely re-did our center entrance walls two years ago with new plants and flowers, which was a costly job,” she added. “We couldn’t do any major projects last summer as we needed to collect two years’ worth of dues for it. This summer, we were finally able to reface and change the shape of our entrance walls, get new entrance signs and change our community’s name to Country Estates North. We hope that this change will make us more well known as a neighborhood. We will be changing our entrance wall light fixtures to LED as well as planting flowers in our new flower bed baskets in the front of the entrance walls.

“We are looking at our next major project to be the changing of all our street signs,” Gordon concluded, addressing this all-important issue. “This might take place two summers from now because [of] how costly it will be. Other projects we have on the list for our future other than the street signs would be lighting in the entrance walls, a new streetlight lamp at the entrance of the community and making Edgewood Lane and Town Path feel apart of our community. Since I have been president, I know those two streets have been neglected and given up on. As a real estate salesperson from Berkshire Hathaway Laffey International, I understand how that could hurt the resale value of their home in the future. I have been in contact with a few of the homeowners on those two blocks to try and help them with any concerns they have with their streets. We recently had our annual civic association meeting and many homeowners voiced to me on how many people cut through our neighborhood speeding down the streets ignoring the stop signs. Although this is not something the Civic Association can fix, we will try and help by reaching out to those who can put new signs in or other ways to stop this from occurring before someone gets hurt.”