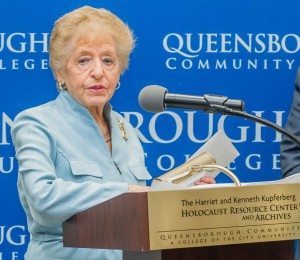 Though she still speaks with the hint of a German accent, Anita Weisbord is a proud American, a Holocaust survivor and was a participant in Britain’s Kindertransport program that saved some 10,000 European children from Nazi hands.

On Friday, Nov. 13, at 6:30 p.m., Weisbord will share her Kindertransport Story at Temple Sinai of Roslyn’s Kristallnacht service.

Born in Vienna, Anita Nagel Weisbord grew up happily and comfortably until Hitler’s armies invaded Austria in 1938. Her family realized that visas for Jews to exit the country were nearly impossible to obtain, so they seized the chance to save Anita and her sister by sending them to England on a Kindertransport. A kindly missionary took in Anita, who miraculously was reunited with her parents after the war.

A well-spoken woman who relishes relating her story to young people, Anita remains positive in outlook, and cautions all to be upstanders, not bystanders, in the face of hate.

During the Friday night service, Anita will describe her family’s heart-wrenching decision to send her abroad, and hear of her unspeakable joy when they were reunited.

Her compelling story is important for all to hear firsthand. All are welcome.