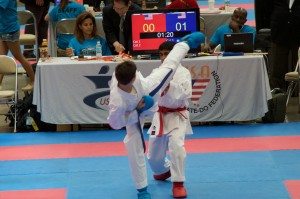 Roslyn resident Ethan Wachsman has had a busy summer. And by that, we don’t necessarily mean camps or swimming. Instead, Wachsman continues to make his mark in the world of karate.
In early July, he took gold in the 13-year-old advanced kumite (fighting) division at the AAU National Karate Championships in Fort Lauderdale, FL. Wachsman then went on to compete at the USA-NKF National Championships and Team Trials in Pittsburgh, PA and earned his spot on the USA Junior National Karate Team. From there it was on to Houston, TX for the AAU Junior Olympics, where he once again took a gold medal in the 13-year-old advanced kumite division. And that’s not all. At the end of August, Wachsman will join the rest of the Junior National Karate Team and travel to Guayaquil, Ecuador to compete in the Junior Pan American Karate Federation Championships. Wachsman is currently busy training with his elite coaches at Tokey Hill Martial Arts in Port Washington. Leading up to his Ecuador trip, the Roslyn youngster is trying to help those less fortunate and is raising money for the victims of the April, 2016 earthquake which devastated coastal Ecuador. Check out his gofundme fundraising page at www.gofundme.com/2hdf3c4.