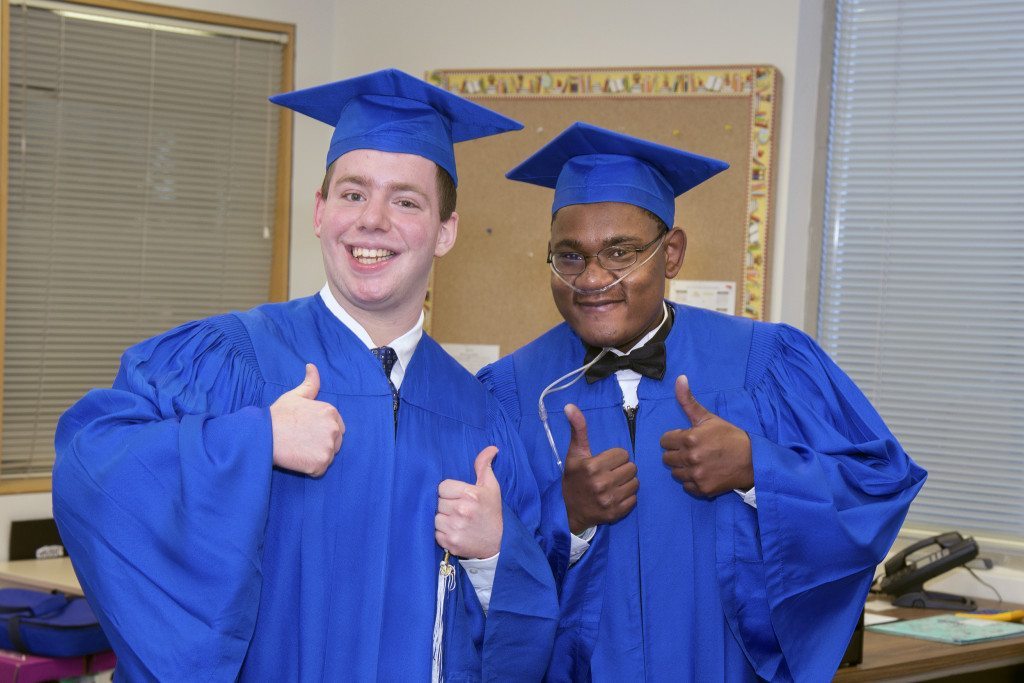 Dr. Calvin O. Butts III, President of SUNY College at Old Westbury, was the commencement speaker on June 26 at the Albertson-based Henry Viscardi School at The Viscardi Center, which serves children with physical disabilities.

During his speech to the graduates, Butts focused on believing in themselves, others in their lives, and the methods, which had successfully gotten them to where they are today. He also spoke about the importance of education and believing in what you’re striving towards.

“Without a trained mind and an inspired heart, you’ll go nowhere,” said Butts. He also thanked the faculty for befriending the students and noted the active role they, and the graduates’ family and friends, played in preparing them for graduation, as well as the trust the students had put in all of them over the years.

“We are honored that Dr. Butts came and delivered such a powerful message to our graduates, their families and special guests,” said John D. Kemp, president and CEO of The Viscardi Center. “His overarching message was that nothing is impossible if you have faith.”

The 47th commencement ceremony included 18 Henry Viscardi School students. Many of the graduates are attending higher education institutions in the fall, including Hofstra University, Dowling College, The College of Westchester and local community colleges to pursue coursework in business, graphic design, education and Liberal Arts. Several will be freshmen at SUNY College at Old Westbury. Butts encouraged these graduates to come by and visit him. Other graduates are pursuing vocational training and participating in community-based programs.

This year’s valedictorian, Ron Kort, plans to study business at Hofstra, where he and a fellow graduate will also be dorming. During his remarks, Kort spoke about the unique, shared perspective the graduates had on the world and how it would be the simple things about Henry Viscardi School that he’d miss most after graduation. These included the building’s bricks, eating lunch together and touchdown passes in gym.

Salutatorian, Jessica Poche admitted that the Class of 2014 was known for its loudness, but also pointed out how this “gift” also gave them the willingness to speak up for themselves. After summing up her classmates in three words – determined, quirky and passionate – Poche encouraged them to stay motivated and to trust that dreams come true.

After reflecting on the memories she’ll have of her first year at Henry Viscardi School, Diana DeVivio,Superintendent/Principal, gave some parting advice to the seniors, “Remember not to shrink from a challenge but thrive in it, because your greatest accomplishments will come through those times when you have to work through obstacles and a struggle.”

“Rather than resisting or resenting them, seek them out. They will help you grow and continue to learn and enable you to face everything that comes your way. Seek in your future the opportunity to enhance your self-knowledge and pride in your achievements,” added DeVivio.

Krebs was recognized for her love of the children, her creative curriculum thinking and her dedication to training future adapted physical education teachers. The grant was made possible through the generosity of Marianne Dolan Weber and Heartfelt Management and will benefit the School’s students.