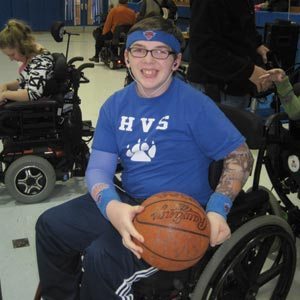 This annual tournament, which is sponsored by the Lisa Beth Gerstman Foundation, is one of the few times the students have the opportunity to compete with peers from other schools. The Henry Viscardi Cougars Varsity team took first place and the Cougar’s JV team secured second place in the tournament. Each played in highly competitive wheelchair basketball games against The Westchester School for Special Children.

“I am very happy for our players,” said Joe Slaninka, head basketball coach at Henry Viscardi School. “They played well and it was a total team effort in every aspect of the game. I am proud of our Cubbies, JV and Varsity teams.”

“This is the seventh tournament that I’ve participated in,” said Chris, a ninth grader. “I like playing because it teaches us sportsmanship, teamwork, knowledge of the game and, it’s really fun.”

“This tournament is such a wonderful experience for the children,” added Henry Viscardi School Principal, Diana DeVivio. “It promotes overwhelming school pride and spirit. The joy of participating in these activities is something our students hold on to for the rest of their lives.”

Chayyamattie Rosanna Singh-Gill, whose son transferred to the Henry Viscardi School because of its reputation and basketball program said, “It is my hope that my son’s participation in this tournament allows him to make a difference in the lives of other people with disabilities.”

At the conclusion of each year’s tournament, a Viscardi player is chosen to receive the Scott “Bubba” Pollack Award. This award is named after a former captain of the Viscardi basketball team who passed away and is given to a player on the team who demonstrates sportsmanship and character on and off the court. This year’s recipient was Juaquan, a senior at the school.