Nassau County opened its first vaccination hub last week, the initial step in the process to vaccinate the population against the novel coronavirus.

The state currently lists a number of eligible groups, mainly health care practitioners and categories such as funeral home workers.

The hub is located at Nassau Community College’s CCB building, where the county’s Department of Health has set up a vaccination center.

Anton Media Group asked Dowling why the vaccine rollout has been plagued by slow implementation.

“The volume of the vaccine being manufactured is less than what [is] desire[d] right now,” he replied. “Pfizer reduced its allocation by 50 million right before the holidays. The volume of people who need it is this (spreading hands), the volume of vaccines is this (drawing hands in).”

He added, “But that vaccine volume will increase over time as companies come out with new [ones]. A lot of the issues will get resolved to some extent when the production of the vaccine increases and the allocation changes.”

Curran commented, “We know the vaccine is the key to getting us back to normal, to keeping our kids in school, to keeping our businesses going. My goal is to get as many residents vaccinated as quickly as possible.”

She said that Northwell personnel will be aiding DOH staff at the pod, which will include members of the county’s Medical Reserve Corps (MRC).

MRC members “have been training for this kind of mobilization for years and years—so they are ready to be mobilized,” Curran said.

“The vaccination goes in phases,” Dowling observed. “We started out with the ICU and emergency room staff at the hospital. Then we go to the patient-facing employees. Now we’re going out to do ambulatory home care. My guess is over the next couple of weeks we will be getting guidance from the state about the population groups that will be eligible for the vaccination. Our goal is to make sure we do the vaccination process quickly and effectively.”

He speculated that vulnerable populations would be in the guidelines put out by the state in the near future.

“But this is going to take quite a bit of time—it’s going to require patience,” he said of the process.

Curran wrote a letter to Governor Andrew Cuomo asking that “law enforcement officers, corrections officers, firefighters, ambulance personnel and other similar first responders not covered by the NYSDOH guidance be added immediately to the list, to the greatest extent possible, to protect them and the general public with whom they interact routinely on a close basis. Unfortunately, we have seen rising infection rates among our first responders.”
Anton Media Group asked Curran, “Are you going to follow the governor’s example and wait until everyone else has taken the vaccine—or set another example by taking it yourself?”
She replied, “On one hand I want to set an example to show that there is nothing to be afraid of. On the other hand, I want to wait until my category of persons—whatever that is—is eligible. So I think I’ll wait until my category is called.”

“So you think there might be a category of elected officials?”

“I would think so,” she replied. “We’re very present. We’re out there with the public. I don’t know if it’s politicians or elected officials, but as soon as my number is called I’ll line up.”
Curran, asked about the 400 daily vaccinations at the hub in the face of a population of 1.3 million people, said more hubs will be opened. The county, she noted, is at the mercy of the state as far as vaccine distribution.

Residents can visit the county’s vaccine website at www.nassaucountyny.gov/vaccine for updates on who is currently eligible for the vaccine. 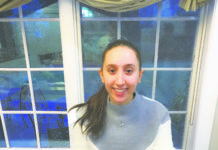 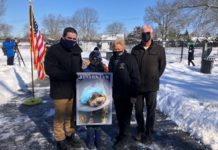