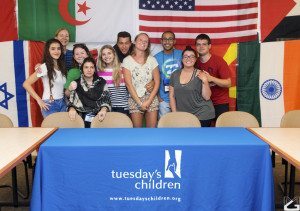 Tuesday’s Children hosted a weeklong peace-building and conflict resolution symposium at Bryn Mawr College from July 26 through Aug. 3. Sixty teens from around the world who have lost a family member to an act of terrorism came together at Bryn Mawr in Pennsylvania for an international symposium called Project Common Bond under the auspices of Tuesday’s Children, the premier nonprofit serving the 9/11 community and communities worldwide affected by terrorism. The program, now in its eighth year, is changing the lives of young people around the globe through a curriculum that teaches peace building, fosters inter-cultural understanding and encourages positive community action.

Inspired by 9/11 children who wanted to create an international community with others who experienced similar loss, Tuesday’s Children created Project Common Bond in 2007. In attendance this year were young adults, ages 15 to 20, from Algeria, France, India, Indonesia, Israel, Kenya, Macedonia, Northern Ireland, Pakistan, Palestine and Spain, as well as Americans who lost a family member on 9/11, and children of military personnel killed in post- 9/11 active duty.

“For these teenagers, the sudden, violent and public nature of their loss becomes an overwhelming and defining characteristic of their lives,” said Terry Sears, executive director of Tuesday’s Children. “Their experience is not something that’s easily shared with others. At Project Common Bond these teens feel safe and are surrounded by others who understand exactly what they have been through. Project Common Bond helps them turn their personal tragedy into strength and create positive change within themselves and their communities.” During the eight-day program, the teens participated in therapeutic group work, leadership sessions, conflict resolution and peace-building projects and team events designed to foster trust, healing and communication. They also participated in a day-long adventure-based Outward Bound program run in conjunction with the Philadelphia Outward Bound School.

Mijal Tenenbaum, age 21, whose father was one of the 85 victims killed in the AIMA (Argentine Israeli Mutual Association) headquarters 1994 bombing in Argentina said, “Project Common Bond is a place of hope and healing. It unites people from completely different backgrounds, and in some cases opposite sides of the same conflicts, for a week of talking, listening and personal growth. While at first our differences seem insurmountable, throughout the week we start to embrace them and learn more from each other’s cultures and experiences. It reminds us that we are not alone.”

This year, for the very first time, Tenenbaum, along with four other Common Bond alumni, Jess Wisniewski, Francesca Picerno, Robbie Pycior and Adrien Abescat, returned to Project Common Bond as group leaders. They served as role models for the newest PCB participants and as examples of how personal tragedy can become global triumph.

Tenenbaum added, “I hope to encourage other teens to listen, share and work toward a brighter future. If there is even the slightest chance that my voice and my story will change one person’s mind and maybe save one life, then that makes this all worth it.”

Robbie Pycior, whose father was working at the Pentagon on 9/11 said, “Project Common Bond has allowed me the unique opportunity to connect with other teens like myself who have endured horrific tragedy. I have learned that in helping others, I help heal myself. ” The curriculum was designed by Harvard Law School’s Negotiation and Mediation Clinical Program and incorporates the Dignity Model designed by Donna Hicks of the Weatherhead Center of International Affairs. The symposium is delivered by a team of professionals including psychologists, educators, social workers and health care professionals coordinated by Project Common Bond curriculum director Monica Meehan McNamara. Mark Fowler of the Tanenbaum Center for Interreligious Understanding will also participate.

Project Common Bond is designed and directed by Tuesday’s Children with the active engagement of its international partners. The nonprofit organization founded by family and friends of 9/11 victims, Tuesday’s Children has made a longterm commitment to provide programs and support to every individual impacted by the Sept. 11, 2001 tragedy and more recently those from around the globe who have lost a loved one due to an act of terrorism. Tuesday’s Children has spent the past 13 years working with over 10,000 individuals coping with recovery, including bereaved families, families of 9/11 responders and families of post-9/11 victims. Tuesday’s Children has garnered families’ trust while gaining an intimate understanding of the problems and realities in the days, months and years after a tragedy. For more information, visit www.tuesdayschildren.org