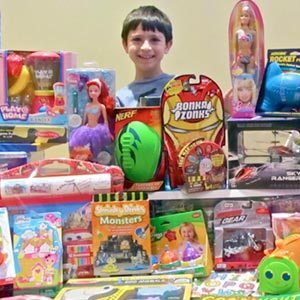 Adam Liebowitz, a fourth grade student at the Harbor Hill School in East Hills, has organized a toy drive and fundraiser to raise money for the Sid Jacobson JCC’s Social Services Programs.

This is Adam’s second year and was recently appointed Chair of the JCC’s Toy Drive Committee, which he founded in 2012. Adam began the effort by donating some of his own unused birthday and holiday gifts to the 2013 Auction For Excellence. After that, he began to encourage his friends to join him in making the charitable gifts. In the end, he collected over 100 brand new toys that were sold in children’s toy baskets at the Auction For Excellence, $650 on his fundraising page, and raised approx. $4,000 in total for the cause.

The money raised by this year’s auction will help to provide over $600,000 in financial aid to residents in our community, throughout greater Long Island and Eastern Queens, so that they can participate in critical programs at the JCC- from support groups to Alzheimer’s day programs to the JCC’s special needs programs and day camp, Camp Kehilla. So many people in our community rely on these programs and these funds ensure that the JCC can continue its long-standing tradition of providing an array of “award winning” social service programs to all in the community who need them. No one is ever turned away for lack of financial ability. This incredible community center serves all, no matter what affiliation or economic status.

Adam recently gave two presentations about the toy drive, to the New Leadership Committee at the JCC and the children in his class at Harbor Hill School, to seek out committee members willing to join him with this year’s toy drive.

In his speech, which he wrote entirely on his own, he stated: “I care about the community and I want to help people not as fortunate as I am. This money helps them do activities with people who have the same illnesses as they do. This toy drive will help the community feel special so everyone is nearly the same. I really hope people will enjoy these programs (which are funded by the Auction) so they could be with people who have the same illness as they do. It will help if I have a committee helping me. One person could do amazing things, but a committee can do so much more…I hope people will join my committee so people who are less fortunate know that there are people out there who feel the same as they do…I hope everyone here thinks the same way as I do and will join the committee and put in the effort that I am…”

At the end of his presentation to the New Leadership Committee, he was given a surprise. He was told that they all joined his committee and have already collected many toys, which they brought to the meeting to show him. Adam was shocked and thrilled by the honor.

Adam’s toy drive and fundraiser will continue until March 1.

Donations of new toys can be given to Bridgette Adair in the JCC Special Events Office (badair@sjjcc.org), directly to Adam Liebowitz, (for those who know him) or by calling 516-458-0390 to arrange for a special pick-up or drop off.

Financial contributions can be made on Adam’s fundraising page at:

The Auction For Excellence, An Epicurean Event, will be held at the Glen Oaks Club in Old Westbury on Thursday, March 20, 2014. This year marks the 19th year of the auction.