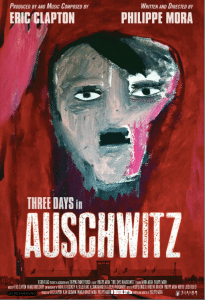 Vision Films is set to release Three Days in Auschwitz, which brings audiences on an emotional and evocative journey with director Philippe Mora, accented by a moving score from music legend Eric Clapton. The film will be shown at Bow Tie Cinemas in Roslyn for one week beginning Sept. 9.

Born the year after World War II ended, Philippe Mora was a second-generation holocaust survivor who lost eight members of his family at Auschwitz. For many years, Mora was unaware of the role his father played in the French Resistance and the story of how his mother had evaded certain death at Auschwitz by just one day.

Now Philippe Mora returns to the barbed wire fences that corral the Auschwitz-Birkenau concentration camp—a symbol of barbarianism and what humans are capable of. From Melbourne, to Paris, and London, Mora traces the people who lived through the horrors of concentration camps and discovers how his own life might have been ended before he was even born.

Despite it’s dramatic themes, Three Days in Auschwitz leaves us with a valuable and uplifting message of the resilience of the human spirit over tragic circumstances, and the importance of learning from our past so that we can better ensure a brighter future.

Eric Clapton coproduced and composed and performed the original score, which is not available for sale and can only be heard by viewing the film.

The special “Three Days in Auschwitz” theatrical events will include a Q-and-A with Mora and short film segments from “Monsieur Mayonnaise,” a film about how Mora’s father, who was part of the French resistance, saved several with an unlikely tool—mayonnaise, and “German Sons,” about the relationship between Mora and the son of a Nazi, who discuss their past together.

Mora, born in 1949 in Paris, is an award-winning director with two major retrospectives in Poland 2010 (New Horizons Film festival) and Germany 2014 (Oldenburg film festival life achievement award). He directed many major theatrical motion pictures, including Howling II & III, Death of a Soldier, Brother Can You Spare A Dime, Swastika and Mad Dog Morgan, and is an accomplished painter inspired by the memories of Holocaust survivors and his feelings about the Nazis.

Director Philippe Mora said, “I thought it better to make a very personal film so that people could relate to it rather than try to make an objective documentary, which would have been impossible.”

Managing Director / CEO of Vision Films Lise Romanoff said, “We’re honored to bring this important film to audiences worldwide.  Whether you are directly affected by the holocaust or not, this poignant picture is sure to stay with you long over it’s over.”

Three Days in Auschwitz will be released in select theatres in North America on Sept. 9.  The special screening events will also include a selection of short film segments from Mora’s other films on the subject, Monsieur Mayonnaise and German Sons, and an exclusive Director Q&A.  The film will also release on DVD and VOD on the same day in both the USA and Canada.