The White Shadow Made His Mark | Roslyn News
Wednesday, October 20, 2021 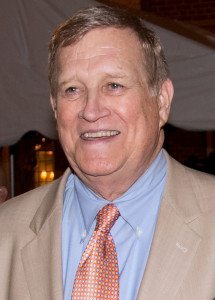 One of Manhasset’s true talents has passed away last week. Ken Howard died on Wednesday, March 23, at the age of 71 in his Los Angeles home. Howard was very close to his hometown, Manhasset. Reverend Jimmy Only of Manhasset’s Congregational Church said, “His family was very active in our church for decades. The last time he was here was for the funeral of Fritz Mueller (2015), his Manhasset High School basketball coach who inspired the 1970’s TV show, The White Shadow.” Howard, who attended Manhasset High and played All-County there, was inducted into the Manhasset High School’s Hall of Fame in 2009 along with his former coach.

The actor was best known for his role in the CBS TV series The White Shadow, where he played Coach Ken Reeves and drew from his own personal experiences on his own high school basketball team. Coach Reeves has reached his final resting place. Howard was a Tony and Emmy Award-winning actor and president of the performers union SAG-AFTRA.

“I played at Manhasset High on Long Island for a wonderful coach named Fritz Mueller,” he told The Sporting News in 2005. “My nickname, then, was White Shadow. My senior year, I was the only white guy in the starting five. Our colors were orange and blue, like Carver High.”

Although Howard was part of the school’s National Honor Society and played All-County, he found himself drawn to performance. Turning down numerous athletic scholarships, Howard was able to focus more on his love of the arts. He performed in high school musicals, sang in the Congregational Church of Manhasset choir and was a featured soloist with the choral group Zumbyes. He was also awarded a fellowship to the Yale School of Drama but left to make his Broadway debut in Neil Simon’s Promises, Promises.

Over the years, Howard’s career had greatly developed and he had also made appearances in numerous TV series and movies such as The Manhunter, Boston Legal, 30 Rock, Curb Your Enthusiasm, The Wedding Ringer, Melrose Place, The West Wing, Blue Bloods, Rambo and Dynasty, among others. His most recent appearance was alongside Jennifer Lawrence in the film Joy.

A lifelong devotee of theater and especially Broadway musicals, Howard deeply missed live performance as his career trended toward Hollywood. However, he again put his compelling voice to work first in his Emmy-winning on-camera narration of Facts for Boys: The Body Human and later narrating more than 30 best-selling audio books. Manhasset native Dennis Klainberg said of Howard, “I met and marched with him at the Manhasset 300th Birthday parade; he visited our schools and spoke passionately about his experiences with our theatre kids.”

He taught master classes at the American Repertory Theatre Institute and was an instructor at Harvard University, Harvard Law School and Amherst College. His teaching experience helped form the basis for his book Act Natural: How to Speak to Any Audience, published by Random House in 2003.
Aside from warming the hearts of audiences on prime-time television and on the big screen, the 6’6’’ blonde and blue-eyed actor has made even more of a contribution to the world of acting as he was also elected president of the Screen Actors Guild (SAG) in 2009. Howard was asked by friends to help stabilize the then troubled SAG, and in 2011 he was reelected after promising to unite SAG with the American Federation of Television and Radio Artists (AFTRA).

While speaking on behalf of SAG-AFTRA, Howard said uniting the union was “the most important thing I have ever done.” In a statement released by SAG-AFTRA following Howard’s passing, SAG-AFTRA’s acting president Gabrielle Carteris had much to say about the renowned actor.

“Ken was an inspirational leader and it is an incredible loss for SAG-AFTRA, for his family and for everyone who knew him,” said Carteris. “He was a light that never dimmed and was completely devoted to the membership. He led us through tumultuous times and set our union on a steady course of excellence. We will be forever in his debt.”

In addition to the SAG-AFTRA Foundation, Howard served on the board of directors of the Actors Fund, the Los Angeles Alzheimer’s Committee, and was the national spokesperson and an executive board member for the Onyx and Breezy Foundation for the Welfare of Animals.

As a kidney transplant recipient, he was eternally grateful to his transplant donor, family friend and well-known stuntwoman Jeannie Epper. He served as chancellor of the National Kidney Foundation and faithfully worked to encourage organ donation.

Howard was born March 28, 1944, in El Centro, California, to Kenneth Joseph and Martha Carey Howard. He had a younger brother, Donald Howard, also an actor. All are deceased. Howard is survived by his wife of 25 years, professional stuntwoman, Linda Fetters Howard. In lieu of flowers, remembrance contributions may be made to the SAG-AFTRA Foundation and the Onyx and Breezy Foundation for the Welfare of Animals.