The Viscardi Center Board of Director’s Chair Russ Cusick announced Dr. Chris Rosa, most recently Assistant Vice Chancellor for Student Inclusion Initiatives, City University of New York (CUNY), has been appointed as the next President and CEO of the Center, effective Jan. 1, 2022. Dr. Rosa will also serve as President of the Henry Viscardi School and Abilities, Inc.

“In our search for the next President and CEO, we were fortunate to meet with and interview an extremely well qualified pool of candidates,” Cusick, who also served as the Chair of the search committee, said. “A collaborative and visionary leader, Dr. Chris Rosa brings exemplary experience in education, nonprofit and advocacy. He will continue the legacy of Dr. Henry Viscardi, Jr. and lead the organizations to new heights. On behalf of the boards of directors and trustees, we are delighted to welcome him to this paramount position and are prepared to support him in this leadership role.”

“As a lifelong New Yorker with a disability, The Viscardi Center has always loomed large in the formation of my disability rights consciousness and identity,” Dr. Rosa, a wheelchair-user since age 12, who has Limb-Girdle Muscular Dystrophy, said. “The prospect of serving as the leader of this historic organization is, at once, humbling and thrilling.” 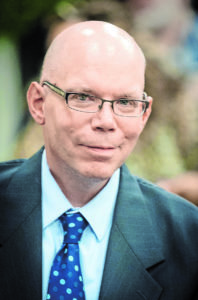 Dr. Rosa has been a member of the Henry Viscardi School Board of Trustees since 2017, as well as an active member of The Viscardi Center’s Public Affairs Committee. He has served as the Assistant Vice Chancellor for Student Inclusion Initiatives at the City University of New York, the nation’s largest urban public university system, since 2019. In this role, he designed and led programs that promote access, equity and inclusion for students who have historically under-participated in higher education, including CUNY’s more than 11,000 students with disabilities, 3,200 student veterans, 17,000 LGBTQI students and more than 6,000 undocumented students. Dr. Rosa’s higher education governance includes serving as CUNY’s Interim Vice Chancellor for Student Affairs and the University’s Assistant Dean for Student Affairs. He joined the CUNY Office of Student Affairs in July 2004 after 11 years of student affairs experience at his alma mater, Queens College. While at Queens College, he served as its Director of Services for Students with Disabilities, as Director of its Student Support Services Program, as its 504/ADA Compliance Officer, as its Affirmative Action Officer and as a Student Disciplinary Officer. At Queens College, he collaborated with the New York City Department of Education’s District 75 to create its Inclusive Higher Education Program.

Dr. Rosa’s major accomplishments/recognition include:
• Creating the “CUNY LEADS” program, a model career readiness program for college students with disabilities that empowers them to achieve competitive employment at more than twice the national rate.
• Leading efforts to establish CUNY as a first-choice college destination for neurodiverse students through the creation of the FAR Fund-supported CUNY Project REACH for students on the autism spectrum and CUNY Unlimited, an inclusive higher education program for students with intellectual disabilities.
• Acting as the Chair of the Executive Committee of the U.S. President’s Committee on Employment of People with Disabilities (now known as the U.S. Department of Labor’s Office of Disability Employment Policy).
• Playing a key role in bringing the Robin Hood-funded SingleStop USA program to CUNY community colleges, which supports the retention of students from low-income families by helping them to secure important city, state and federal benefits.
• Serving as Vice Chair of the New York State Independent Living Council and as a member of the National Board of Directors of the Muscular Dystrophy Association.
• Receiving a “Liberty Medal” by the New York Post in 2012, for his leadership in expanding employment opportunities for New Yorkers with disabilities.

Dr. Rosa earned his B.A. in Sociology and Philosophy from Queens College in 1989 and his Ph.D. in Sociology from the CUNY Graduate Center in 2001, with a dissertation entitled

The Viscardi Center, is a network of nonprofit organizations based in Albertson. The Center provides a life-span of services that educate, employ and empower people with disabilities.

—Submitted by the Viscardi Center