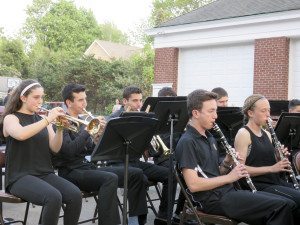 The weather couldn’t have been more glorious on Tuesday, May 12, as the community was treated to a delightful concert on the lawn of the East Williston Village Green as the Willets Road middle school Wind Ensemble and the Wheatley high school Symphonic Band joined forces. Approximately 120 musicians from the two schools made beautiful music together.

The program began with the Willets Road Wind Ensemble playing “The Tempest” by Robert W. Smith, “Spirit of the Wolf” by Michael Oare and “Dansbury Run” by Michael Sweeney.

Wind Ensemble was directed by music teacher and beaming new dad Scott Hoefling. The sounds of more than a dozen instruments converged to produce marvelous melodies.

Next up was the Wheatley Symphonic Band performing “Block M” by Jerry H. Bilik, “Young Person’s Guide to John Williams” by John Williams/Bocock and “The Billboard March” by John N. Klohr. Wheatley music teacher Dr. Peggy Ho directed, blending a mixture of 15 various instruments. For the final set, both groups combined to play “America the Beautiful” by Katherine Lee Bates, “The Battle Hymn of the Republic” by William Steffe, “My Country, Tis of Thee” by Samuel Francis Smith, “Seventy Six Trombones” by Meredith Willson, “The Phantom of the Opera” by Andrew Lloyd Webber and “Stars and Stripes Forever” by John Philip Sousa.

The Willets Road musicians have already begun rehearsal for the adorable Memorial Day Parade, which will take place on Monday, May 25, from 10:45 a.m. to 1 p.m. The marching band begins on Downing Street at North Side Elementary School and will continue to the East Williston Village Green. The busy performers are also preparing for their spring concerts. The sixth and seventh graders will be performing on June 4 at 7 p.m. and the fifth graders will play on June 9 at 7 p.m.

On June 10 at 7:30 p.m., the community is welcome to enjoy the wonderful Wheatley Orchestra and Chorale Concert in The Wheatley School auditorium at 11 Bacon Rd, Old Westbury.