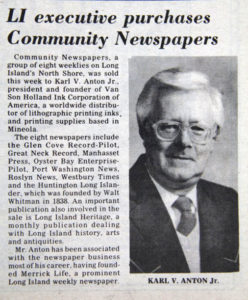 How We Got To Where We Are

This year, The Roslyn News is celebrating its 140th anniversary. More important is that the area it covers are worth celebrating themselves. As Roslyn begins to settle into the new century, the area remains one of the most desirable places to live in the New York City metropolitan area. The road to where Roslyn is today has­—like any place else—been subject to the usual turns of history, some of them unforeseen. A degree of small-town living within a giant metropolis has been the Roslyn story. And its success has been due to the actions of a handful of stout individuals. Here are some key moments.

Any society is defined by the character of its people. The architecture surrounding it matters, too. In 1895, patriotic individuals all across the United States were erecting monuments and statues to Civil War veterans. Roslyn was no different. The first big moment in the village’s modern history was the completion of the Ellen E. Ward Memorial Clock Tower, a monument to one of Roslyn’s first citizens, a woman who saw two of her sons fight for the Union in the Civil War.

The Ward family never left Roslyn. Its last surviving member, Marshall Ward, lived in downtown Roslyn until his death in 2015. Ward was one of the many citizens who fought against efforts by Stop & Shop to build a commercial structure in downtown Roslyn during the mid-1990s. In 1995, on the occasion of the structure’s centennial, Morris Welte, godfather to Janet Galante, the village’s first female mayor, used his clockmaker skills to get all the clocks working. Today, the Clock Tower houses a time capsule, plus it is open for residents to climb to the top and take in a spacious view of Hempstead Harbor.

At the time of the Clock Tower’s erection, America was enjoying its Gilded Age. Nassau County was ground central of the new age. The island was heavily comprised of that strange mixture of landed gentry living in spectacular mansions, while the mostly Eastern European immigrant class provided maintenance. The age of such real—as opposed to “McMansion”—structures was in bloom. The Frick Mansion, for instance, would eventually become the home of today’s Nassau County Museum of Art, the finest such museum outside of Manhattan.

The more famous mansion, however, belonged to Clarence Mackay. An heir to a mining fortune made in Nevada, Mackay, from 1889 to 1902, had the famed architect Stanford White construct his Harbor Hill estate. The high point came in the peak of the Roaring `20s. In 1927, Charles Lindbergh used Long Island as the launching pad for his legendary transatlantic flight. When Lindbergh came home, he was the most celebrated hero in American history. And after the ticker tape parades, Lindbergh was the guest of honor at a huge welcome home party at the Mackay mansion. Meanwhile, Mackay’s wife, Katherine, a prominent suffragette, became the first woman to serve on the Roslyn School Board.

No one could see it at the time, but that grand era only had a few decades left. On Dec. 7, 1941, the Japanese bombed Pearl Harbor and a reluctant America went to war. Long Island, too, was profoundly affected. Gone was the mostly rural island of estates and day laborers. In Roslyn, that meant the end of the mansions and the rise of the middle class. The 1929 stock market crash cost Mackay a great deal of his fortune. Two decades later, in 1947, the Mackay mansion was dynamited. Replacing it were the three-and-four-bedroom residential houses that define modern-day Nassau County. Also after the war, the U.S. found itself in a protracted Cold War conflict with the Soviet Union. In 1955, the United States Air Force opened an Air National Guard site on 50 acres in East Hills. That, too, would shape the village’s future in unexpected ways.

Meanwhile, with suburbia booming, construction threatened little Roslyn. By the 1960s, with the country flush with cash, urban renewal was all the rage. Could Roslyn’s many historic residential structures survive? It didn’t seem possible. Lester Arstark, a longtime resident, once told The Roslyn News that the village was in danger of “becoming a slum,” with old houses being abandoned. It appeared that these houses, some of them dating back to the 17th century, would not be spared the wrecking ball.

It didn’t happen. Led by Roger and Peggy Gerry, Roslyn residents banded together to form the Roslyn Landmark Society. The organization was able to secure historic designation for many of the houses, including the Van Nostrand-Starkins House, and Roslyn became the nationwide model of historic preservation, an achievement noted by then-First Lady Nancy Reagan when she visited the North Shore in 1985.

The preservationist spirit remains alive and well. And it impacted the biggest news story in Roslyn over the past several decades. In 1994, the Massachusetts-based Stop & Shop supermarket chain attempted to build a franchise in downtown Roslyn, on the coveted 11-acre land space off Skillman Street. A resistance rose up and the proposal was defeated. The controversy did force the village to come to terms with the land area. And so, a newly-elected Board of Trustees drafted a Master Plan for construction in downtown Roslyn, one that would confine future works for residential projects. Which, indeed, is what has happened. Recent years have seen the construction of the Atria at Roslyn Harbor senior living facility, while another residential project is being built right now on land where a supermarket would have stood. The Stop & Shop people did open a franchise at The Wheatley Plaza.

By the mid-1980s, the Cold War was winding down. By the early 1990s, bases such as the one in East Hills were closing down. The contract signed back in the 1950s allowed East Hills to make a deal directly with the Air Force at a negotiated price. Instead of residential construction, the village floated a bond that would pay for a recreational park. Today, the Park At East Hills represents the biggest project in that village’s history. The hero in this saga was Jack Russo, a longtime resident and Roslyn Water District official who ably represented the village in dealing with Washington bureaucrats.

The amazing success of that park has inspired residents in Roslyn Heights to construct a similar recreational area. Why not? The Roslyn area provides young families with great neighbors, great schools, low crime and such cultural amenities as the Nassau County Museum of Art and the Bryant Library. In the mid-2000s, the school district was confronted with an embezzlement scandal that took down top officials and school board members. But that was over a decade ago and the Roslyn School District has since retained its standing as one of the top districts in New York State.