Preserving history is what Roslyn does better than most 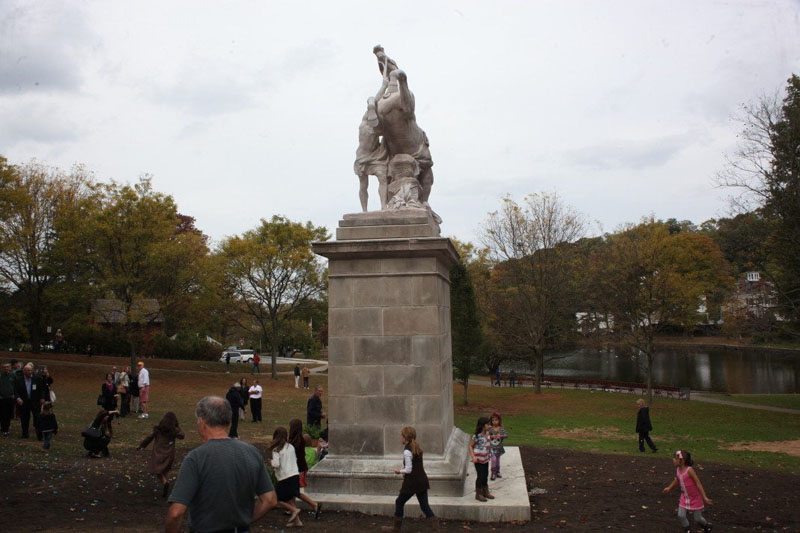 The Village of Roslyn is legendary for its historic restoration efforts. Dovetailing nicely into that identity are the monuments that grace the Roslyn area. There is the Ellen E. Ward Clock Tower, the Civil War statue in Roslyn Cemetery and the Spanish-American war markers also on the clock tower grounds.

For Roslyn, the past is also present and that includes the latest monument to greet visitors. In April 2013, the Mackay Horse Statue, formerly part of the long-lost Harbor Hill mansion, made its triumphant return to Roslyn, where it was placed on a site in Gerry Park, itself an appropriate new home as that park is named for Roger and Peggy Gerry, the two leading preservationists in the village. 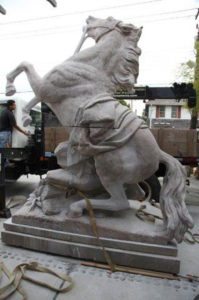 The statue represents a homecoming and yet another restoration success. The story of the horse statue begins with Harbor Hill. Constructed by Clarence Mackay, an heir to a mining empire, the mansion was one of the jewels of the North Shore. In its prime, it attracted such illustrious guests as the Prince of Wales and Charles Lindbergh, who was the guest of honor at a banquet and dance held the night of the latter’s triumphant ticker tape parade down Fifth Avenue following that famous 1927 flight across the Atlantic.

World War II marked the end of an era on Long Island. Many of the old mansions would be bulldozed; suburban housing tracts would take their place. In 1947, Harbor Hill was dynamited. One of the statues ended up at Roslyn

High School, the other remained on its original property, now a residential unit. In 2010, that unit’s proprietor was set to sell his house, now part of the Village of East Hills. Franklin Hill Perrell, then the executive director of the Roslyn Landmark Society, received a phone call from a fellow preservationist. That phone call got Perrell in touch with the statue, which, as he later told the media, stood out like “an apparition.” 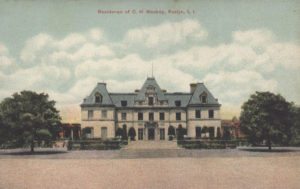 And so, another major preservation effort was underway. The statue, massive as it was, needed significant repair work. The departing homeowners donated the structure to the Town of North Hempstead and the Landmark Society swung into action, raising the $100,000 needed for such renovations. Fundraisers and matching grants did the job and in April 2013, the statue was unveiled in Gerry Park.

The day, as all those who attended can attest, was a moment for much celebration. Among those attending was Michael Mackay, the grandson of Clarence and Katherine Duer Mackay, who took a more melancholy view of the event.

“This statue is a bittersweet reminder of days long gone and the haste in which so much of Harbor Hill was lost,” he told the local media. “It’s a miracle it escaped the bulldozer, and even more miraculous that the Landmark Society could bring it back to life.”

Perrell put a historical perspective on the event, adding that the horse statue represented “the most important statue installation ever on Long Island in terms of its scope and cultural significance.” 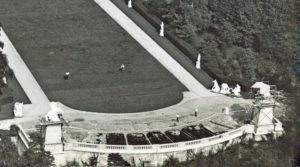 Town historian Howard Kroplick, an East Hills resident, played his own role in the restoration project by assisting with fundraising efforts. He also helped to identify Gerry Park as the perfect new home for the statue.

That unveiling was only the beginning of the statue’s new life. Since Gerry Park is a favorite destination for local youngsters, especially during the snow-sledding season, more renovations are necessary. In 2015, the town board approved a capital project plan which includes a $71,000 Nassau County Community Revitalization Project grant for the statue.

According to town officials, the project will include the design, development and construction of a plaza, including a terrace, decorative benches, historic markers, benefactor plaques and winter protection for the statue. During the winter months, Gerry Park is a favorite destination for children in the Roslyn area and their parents as a place to enjoy the snow by sledding down the steep hill. However, that park now has the imposing Mackay Statue, and there have been safety concerns over youngsters and their speeding sleds. And so, the town spokesman added that the proposed winter fence will protect any people sledding in the winter from getting too close to the statue. The project is slated for completion this year, allowing Roslyn residents, young and old, to enjoy both the park and its attractive new statue for decades to come.