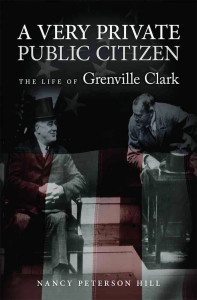 Thousands of Long Island residents visit the Clark Botanic Gardens every year without knowing exactly who the land space is named for. The same is true for most public places with names of notables on them.

On Wednesday, April 15 at 7 p.m., Nancy Peterson Hill, the author of A Very Private Public Citizen: The Life of Grenville Clark. The gardens are not named for Clark himself, but rather his wife, Fanny Dwight Clark. However, they are the product of the 12-acre plot of land that Clark bequeathed to the Town of North Hempstead in memory of Fanny. The talk is the annual author event sponsored by the Clark Garden Auxiliary. It will take place on April 15 at the Clark House, Clark Botanic Garden, 193 I.U. Willets Rd., Albertson.

A native of New York City, Clark was born in 1882 to a family of distinguished stock. His maternal grandfather, LeGrand Bouton Cannon, was a Civil War veteran, a successful industrialist and a friend of Abraham Lincoln. In his growing up years, Clark was on friendly terms with both Theodore and Franklin Roosevelt. He graduated from Harvard Law School and later practiced law on Wall Street. In the private sphere, Clark performed many functions and was a key player in the monumental events of the twentieth century. During World War I, Clark was a founder of the Military Training Camps Association. As America went to war again two decades later, Clark helped to draw up the Selective Service Act. Along the way, Clark, according to Hill, championed academic freedom and fought a successful battle with his friend, Franklin D. Roosevelt, over the latter’s attempt to pack the Supreme Court. In the postwar era, Clark was involved in the civil rights movement. Always interested in the international scene, he was the author of A Federation of Free Peoples, published in 1939 and the influential, World Peace Through World Law: Two Alternative Plans, a 1958 book that he coauthored with Louis B. Sohn. Clark’s work on the international front helped to shape such postwar institutions as the United Nations and the World Court. Clark was also elected to the corporation that governs Harvard University. He stayed active in both foreign and domestic affairs, until his death in 1967. Two years later, Clark Botanic Gardens was founded as a sanctuary for birds, plants and visitors. Decades after his death, he was honored by the United States Postal Service with a stamp bearing his likeness.

Nancy Peterson Hill is a writer and administrator of Diastole Scholars’ Center, a nonprofit conference center, art gallery, and event space affiliated with the University of Missouri-Kansas City. She also serves on the board of the Edgar Snow Memorial Foundation, a U.S./China friendship group and is active in cross-cultural activities in Kansas City and China.

Clark’s life was parallel to the major events of the century, but he also played a role in the uplifting of life in Albertson. The talk promises to be as interesting as Clark’s own life. After the presentation, there will be refreshments, book signings and raffles. For more information, call 516-484-2208.