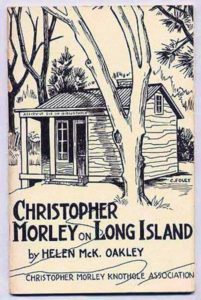 They are not exactly a gang, but instead a group of cultured Roslyn area residents who wish to keep alive the memory of Christopher Morley, the longtime Roslyn resident and famed man of letters.

And on Thursday, March 22, from 7 to 8:30 p.m., The Christopher Morley Knothole Association will hold their first meeting in several years at the Bryant Library in Roslyn.
The speaker will be Tai Vicari, president and CEO of the Networking Marketing Specialist Media Agency. Vicari also heads a book club and co-hosts a weekly web music show, “Tai and the Music Man,” on WLINY.com. each Wednesday night at 8:15 p.m. Peter Cohn, president of the association, said that Vicari’s experience and her “engaging style” will make the evening’s presentation of interest to anyone involved with promoting their personal or organizational goals.

The purpose of the association is to support the preservation and public usage of The Knothole, the rustic cabin which was Morley’s writing retreat. The cabin was originally at Morley’s Roslyn Estates residence where he lived from the 1920 until his death in 1957. After his death, the spacious park along Searingtown Road was named in his honor and the cabin was moved to park grounds. The inside includes Morley’s trusty typewriter, plus copies of his books and those of other authors that this prolific author cherished.

The evening will include an update on the association’s activities and plans for the coming year, and a presentation about how marketing and social networking can help individuals or groups such as the Knothole Association meet their goals.

The association is stirring again thanks to the work of Peter Cohn. Under his leadership, the association is now beginning a campaign to introduce more people to Morley’s writings and increase interest in The Knothole, with a goal of getting the historic site in Christopher Morley Park available to the public once again.

The opening of the cabin would be a saluatory event. In the past, the association hosted numerous tours and lectures at the cabin, including one that included Stan Isaacs, the longtime Roslyn resident and legendary sportswriter. In 1920, Morley and his wife, Helen, purchased their Roslyn Estates home, which the author named Green Escape. Morley commuted into the city and in addition to his journalism, also wrote volumes of poetry and fiction. By the 1930s, the Morley family had grown to include four children, so the man needed a retreat to pursue his creative endeavors. In 1934, Morley himself built the cabin and named it The Knothole. After Morley’s death, a group of friends and admirers formed the Christopher Morley Knothole Association in a bid to keep his memory alive and to save his writing studio. Morley’s house was eventually demolished, but the association was successful in purchasing The Knothole and, as noted, having it moved into Christopher Morley Park. 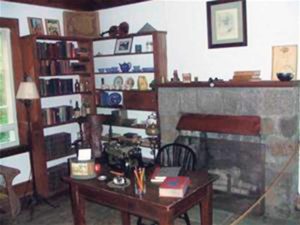 Morley’s career was legendary. He published more than 50 books in his lifetime, while writing and editing a column for the New York Evening Post newspaper. One was one of the founders and a contributing editor of the Saturday Review of Literature and was one of the original judges for the Book-of-the-Month Club. His 1939 novel, Kitty Foyle, was made into a Hollywood film starring Ginger Rogers, who won an Academy Award for her performance.

Morley, too, loved life in Roslyn. In his books, Roslyn was dubbed Salamis and Roslyn Estates named Wending Ways. Also in Roslyn, Morley, in 1940, participated in local theatre productions of his work at the Millpond Playhouse, which were performed in the War Memorial Building on East Broadway. The Bryant was founded as William Cullen Bryant, but in 1952, the playhouse became the home of today’s library, an institution that holds photographs and memorabilia regarding Morley and the Millpond Playhouse, as well as copies of his books.