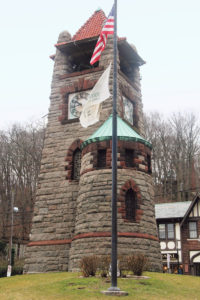 The Village of Roslyn is famous nationwide as an innovator in historic preservation. The Ellen E. Ward Clock Tower is not the oldest building in the village, but it is the most well-known. The structure is named for a woman who was a longtime fixture in the Roslyn community and whose sons fought for the Union in the Civil War.

The Clock Tower sits at the intersection of Roslyn Road and Old Northern Boulevard, serving as a point of departure for those heading either east or west on Long Island, or south down Roslyn Road and north towards Port Washington.

Completed in 1895, its inscription reads:

The tower is granite with sandstone trim. Its bell, which sounds at the hour, weighs 2,700 pounds.

On its centennial anniversary in 1995, three of the clocks were returned to working order, courtesy of Morris Welte, the stepfather of Janet Galante, a future mayor of Roslyn. Local residents claim they still live by the clock’s time.

The grounds include a smaller tower and a cannon captured by the USS Wasp from a Spanish gunboat, the Don Jorge Juan, sunken during the Spanish-American War. In front of the tower is a stone set with a plaque commemorating Roslynites who died during World War II.

In 2014, Marshall Ward was the last descendant of the Ward family to live in the village. Ward, a Long Island native, had moved to Roslyn with his wife in 1986 to a house on East Broadway.