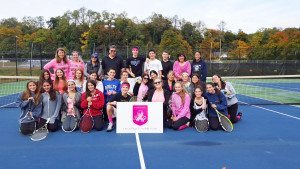 On Sunday, Oct. 25, the Roslyn High School boys’ and girls’ tennis teams, along with coaches Kerri Jannotte-Hinkley and Brian Hoffner, sponsored a Play for Pink fundraiser.

Play for Pink is a mixed up doubles tournament founded to help raise money and awareness for breast cancer. Players in the 17 doubles teams participating in this event included members of the high school and middle school tennis teams, coaches, parents and friends. Participants shared the common bonds of a love of the game of tennis and a desire to help fight breast cancer.

“We saw some great matches played that day,” said Coach Jannotte-Hinkley, “and it was a tough final.”

“We are extremely grateful to everyone who participated in our event both on and off the courts,” said Jannotte-Hinkley.

The Play for Pink tournament raised $800, and was triple matched by an anonymous donor at Memorial Sloan Kettering Cancer Center. Proceeds were donated to ongoing breast cancer research led by Dr. Clifford Hudis and his breast service team and to Go With Courage, a 501(c)(3) not-for-profit charity founded by Robyn Jaslow and her family. Its mission is to help find a cure for all forms of cancer in our lifetime and to ease the burdens of families affected by the disease. It focuses most of its financial funding in the areas of breast and pancreatic cancer research.