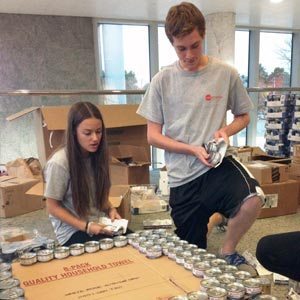 For the past three years, Temple Sinai of Roslyn’s senior youth group SORTY has participated in a charity contest sponsored by Canstruction Long Island Inc., an organization that hosts competitions, exhibitions and events showcasing colossal structures made entirely out of full cans of food.

This year, SORTY won the 2013 “Best CANcept” for a stairway leading to a basket overflowing with condensed milk and honey. This structure was built using over 2,000 cans that Temple Sinai members donated during their High Holy Day food drive. The winning structure was entitled, “Conquering Hunger One Step at a Time.”

In 2011, SORTY won the “Most CANtastic Structure” for Moses parting the Red Sea and in 2012, the won the “Best CANfiguration” for a bowl of matzah ball soup.

Produced locally by Canstruction Long Island, Inc., the event is a design/build competition involving five-person teams of architects, engineers, contractors and/or those professionals mentoring students, associations or businesses as they design and build giant self-supporting structures made entirely of canned food. The structures remain on display to the public for two weeks, and then all food is donated to a local food bank, Long Island Cares, Inc., The Harry Chapin Food Bank.