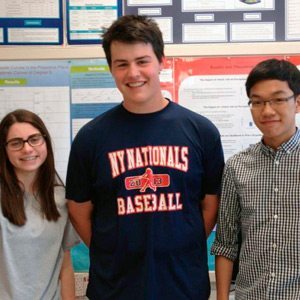 Last March 19 was a banner day for Roslyn High School’s Daniel Chai, Rachel Mintz, and Spencer Shores, all of who qualified at the Long Island Science Congress to compete in the New York State Science Congress.

The competition will be held at Brookhaven National Laboratories and will involve poster presentations to scientist-judges.

“This is a great opportunity for the students to present their work. We’re extremely proud of their hard work, and we have high hopes for them at the state competition,” said Dr. Allyson Weseley, coordinator of Secondary Research.

Chai and Shores, sophomores, worked as a team to look at how people assimilate pieces of information that have both positive and negative aspects. Specifically, the boys looked at how the perception of a student might be altered by the addition of a difficult class in which an atypically low grade was earned. The boys designed their experiment with help from Ms. Alison Morin as part of their sophomore Research Seminar and surveyed their peers as well as college admissions officers. Mintz, a junior, looked at the role of magnesium in abating the potential side effects of a cancer drug called cisplatin. She did her work at the Feinstein Institute over the summer of 2013.

— Submitted by the Roslyn School District