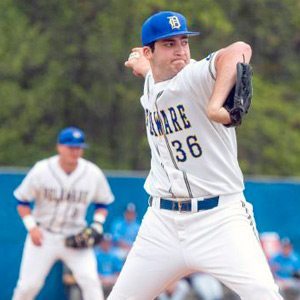 Roslyn native Matt Soren will be beginning the 2014 professional baseball season as a member of the New Jersey Jackals of the Canadian-American Association.

Soren, a 2009 graduate of Roslyn High School, enjoyed a stellar career at the University of Delaware, where he was signed by the Philadelphia Phillies in the 19th round of the 2013 amateur draft. While at Delaware, Soren was twice named a Colonial Athletic Association Pitcher of the Week. In his last year at Delaware, Soren led the Blue Hens with 81 strikeouts in 74.2 innings pitched, while compiling a 3.62 ERA.

Immediately after being drafted, Soren headed south to Clearwater, Fla. to play for the Phillies’ affiliate team in the Gulf Coast League. There, Soren saw limited action, appearing in six games and sporting a 1-0 record with a 3.12 ERA, a performance that included 10 strikeouts and one walk in 8.2 innings of work.

Soren also pitched in eight games for the Williamsport Crosscutters of the New York-Pennsylvania League. In 14 innings, he struck out 10 and walked nine.

The Jackals are members of the American Association of Independent Professional Baseball. They are not affiliated with any major league team. They play their games at Yogi Berra Stadium on the campus of Montclair State University, Montclair, N.J. A number of Jackals players have performed well enough to advance to the Major Leagues, a goal that the hard-throwing Soren remains focused on.