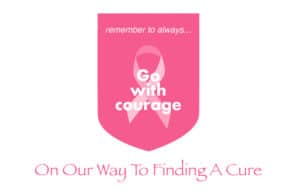 In honor of October being National Breast Cancer Awareness month, Robyn Jaslow, co-founder and president of Go With Courage, a nonprofit charity whose purpose is to raise money for breast cancer research, will be hosting a new event. The fundraiser, called A Day of Courage, will be held in Roslyn Village on Oct. 24.

This shopping event will take place in various stores throughout the village of Roslyn from 10 a.m. to 8 p.m. All participating stores will donate approximately 20 percent of their pre-tax sales to Go With Courage.

The stores will also provide a thank you “gift with purchase” to anyone who buys something during the event. Each store’s gift with purchase item will be unique and proceeds will benefit cancer research.

“This is a great opportunity to help Go With Courage by inviting your friends, family and/or co-workers to eat, drink and listen to some music either before or after you shop for a great cause,” Jaslow said.

Roslyn Social, a sports bar and restaurant, will be creating a special “courage menu” and cocktails for both lunch and dinner. Fifteen percent of the proceeds will be donated to Go With Courage. Other stores participating in the event include Mixology, Imperial China, L’amour Jewelry, The Coder School: Roslyn, Salon Rock, Shag New York, BOUT Boxing, the Roslyn Salt Cave, Diane’s Bakery Cafe and more.

Finding a cure for cancer is near and dear to Jaslow’s heart. Jaslow was diagnosed with breast cancer in 2001 and went through various treatments and surgeries for two years following her diagnosis.

“I had heard the expression for the first time immediately after I got sick, when a very close relative implored me to ‘go with courage,’” Jaslow’s website states. “I hung up the phone, wrote those three words on a piece of pink construction paper, taped it to the refrigerator door, and did not touch it until my wig came off a year later. The name stuck…becoming a mantra of sorts and ultimately became the name of our charity.”

Since the nonprofit was created in 2011, the charity has raised money to support cancer research at Memorial Sloan Kettering Cancer Center, the Breast Cancer Research Fund, as well as continued to support the Lustgarten Foundation and the American Cancer Society through Relay for Life.

Parking restrictions will be suspended in the village all day on Oct. 24. For questions, contact co-founder and president Robyn Jaslow at gowithcourage@gmail.com. For more information about Go With Courage, visit www.gowithcourage.org.