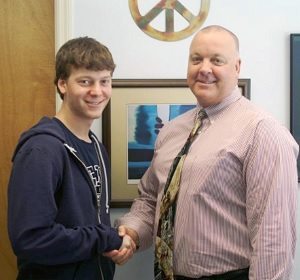 Roslyn High School senior Jordan Fishbach has been selected as a candidate for the United States Presidential Scholars Program. Students are chosen on the basis of their academic and artistic success, leadership and involvement in school and the community. It is a distinct honor, as application is by invitation only; students do not apply individually to the program, nor do their schools nominate them.

Each year, only about 3,000 high school seniors from across the nation are invited to apply for the program, of whom up to 141 are ultimately selected as Presidential Scholars. In addition to being among the top scholars in his class, Jordan is president of the Office of Class Councils (student government), the AIDS Awareness Club and a member of the varsity football team.

According to the White House Commission on Presidential Scholars, the program was established in 1964 by Executive Order of the President to recognize some of our nation’s most distinguished graduating seniors for their accomplishments in many areas: academic success, leadership, and service to school and community.