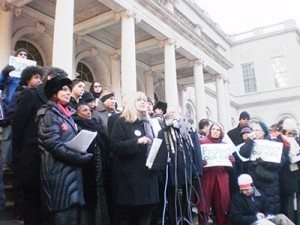 Assemblywoman Michelle Schimel (D –NY), who represents the Roslyn area in the state assembly, joined with New Yorkers Against Gun Violence (NYAGV) and State Legislators Against Illegal Guns (SLAIG), along with national, state, and local elected officials and gun safety advocates at a press conference in advance of the one-year anniversary of the shootings at Sandy Hook Elementary School in Newtown, Conn., which occurred on Dec. 14, 2012.

The elected officials and advocates gathered to honor the victims of the Sandy Hook shootings and the many thousands who have lost their lives to gun violence in the ensuing year, and to renew the call for Congress and state governments across the country to enact sensible gun laws. They pointed to the passage and implementation of the NY SAFE Act, which was enacted with bipartisan support and signed into law by Governor Andrew Cuomo less than five weeks after the Sandy Hook tragedy, as a model for what legislatures can do to help protect Americans from gun violence.

“Has a year lessened the horror of witnessing 20 innocent elementary school children and their teachers being violently murdered? Certainly not. This week marks not just the anniversary of the Sandy Hook Elementary School shooting, but the 20-year mark of the LIRR massacre, a seminal event for all of the nation’s suburbs. That horrific event shook the nation two decades ago,” Assemblywoman Schimel, the Co-Chair of State Legislators Against Illegal Guns, said. “So what does our nation have to show in terms of a sensible legislative agenda to reduce our gun violence? Not much. There is lots of talk in Washington, but no action. By contrast the NY SAFE Act passed with bipartisan support helps to give New York the fourth lowest gun death rate in the nation.”