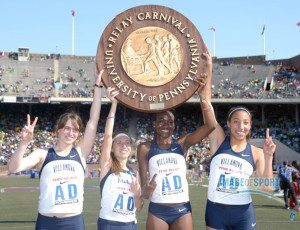 Emily Lipari, Roslyn’s most famous long-distance runner, is currently living in the Boston area, but she has continued her running career, this time as a member of the Boston Athletic Association (BAA).

The 2010 Roslyn High School graduate, who won the acclaim of her fellow classmates for making the cover of ESPN magazine, has followed up her stellar career at Villanova with more success for the BAA.

Recently, she was part of the BAA’s Women’s Cross Country team that won the USA Cross Country Championship meet. For that achievement, BAA team members were the USA Track & Field, New England’s Athlete of the Month.

The quintet of Lipari, Sarah Pagano, Juliet Botorff, Elaina Balouris and Jen Rhines, backed by displacers Katie Matthews and Heather Cappello, scored 43 points to edge Bounder Running Club by 5 points in a field of 38 teams at the meet held in Bethlehem, PA. That win capped a clean sweep of major harrier events after wins at the Mayor’s Cup and the USATF-NE Championship.

Lipari has been a member of the BAA’s high performance team since last summer. Joining Lipari on the squad in 2014 were Elaina Balouris, Juliet Bottorff, Katie Matthews and three-time U.S. Olympian Jen Rhines, who was the first athlete to become part of the high performance team when the BAA announced the launch of the program in 2013.

Lipari joined the BAA after four strong years at Villanova University, the Philadelphia-based institution that for decades has had one of the strongest running programs in America.

At Villanova, Lipari was hailed as one of the top middle distance and cross country runners in the history of the illustrative program. She finished her collegiate career as a two-time national champion, 11-time All-American, 13-time Big East champion and six-time Penn Relays champion. Lipari was the only woman in school history to anchor five Championship of America winning relays at the Penn Relays. As a freshman, Lipari was part of a national championship in the distance medley relay indoors and was also part of the Wildcats national championship in cross country. Her excellence in track continued as a senior when Lipari was indoor national champion in the mile. A three-time Mid-Atlantic Region Athlete of the Year, winning the award once each during the cross country, indoor and outdoor seasons, Lipari capped off her career by being elected as the Villanova Female Senior Student-Athlete of the Year for 2014.

At Roslyn, Lipari had one of the finest careers as any athlete in that school’s recent history. She was a four-time national champion in the mile, including once at the Nike Outdoor Nationals as a freshman, twice at the Nike Indoor Nationals (2009, 2010) and once at the New Balance National (2010). During her senior year, Lipari was the champion in the mile at the Boston Indoor Games and won an outdoor championship in the 3,000 meters at the Penn Relays.

In New York State, Lipari was a nine-time state and federation champion, while being named the 2007 and 2008 New York Athlete of the Year in cross country.

These nationally ranked performances earned Lipari a position at the BAA, one of the oldest running clubs in America and one that has fielded athletes who have competed in the first modern Olympic Games in Athens in 1896 all the way through to the current Boston Marathon. In her first year running for the BAA, Lipari is making contributions to the club in the same manner that she did at both Roslyn High School and Villanova University.