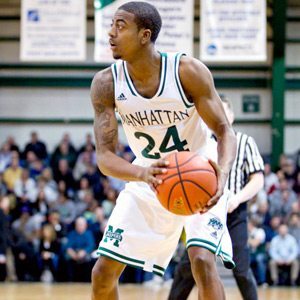 Roslyn native George Beamon continues to bring championship basketball to whatever team he plays for.

Last week, Beamon was named Most Valuable Player of the 2014 Metro Atlantic Conference (MAAC) tournament after leading Manhattan College to an upset win over Iona in the championship game.

The exciting 71-68 win sent the Jaspers to their first NCAA appearance in over 10 years.

Now it’s off to sunny Florida where the Jaspers will play number four-seeded Louisville in the first round of Midwest regional action. Results of the Thursday, March 10 game in Orlando will appear in next week’s issue of The Roslyn News.
In the MAAC tournament, played in Springfield, Mass., home to the Basketball Hall of Fame, Beamon came up big in the semifinal win over Quinnipiac, scoring 23 of his 25 points in the second half as the Jaspers broke a 40-40 halftime tie on their way to a convincing 87-68 win.

That set the stage for the championship game, one in which Beamon scored 16 points and took down eight rebounds.

In addition to being named tournament MVP, Beamon, for the regular season, garnered All-MAAC Conference First Team honors for the second time. For the season, Beamon averaged 19.7 points, 6.8 rebounds and 1.6 steals. According to observers, only a handful of players in Division One college basketball have averaged these numbers, including Duke’s Jabari Parker and Creighton’s Doug McDermott, both of whom are projected to be NBA lottery picks.

“I’m incredibly proud of this accomplishment,” Beamon told The Roslyn News. “It was tough sitting out last year [with an ankle injury], but we came in to this season with one goal in mind, which was winning the MAAC Tournament and advancing to the NCAA Tourney. Now our focus shifts to winning games in the Big Dance.”

Many pundits are already projecting Manhattan as a potential Cinderella-style team in the tournament. There style of play featuring full-court defensive pressure and depth on the bench make them a tough match-up. Indeed, all throughout the championship game, head coach Steve Masiello substituting freely, as the team’s depth wore down their top-seeded foes.

Following his legendary career at Roslyn High School, where Beamon averaged over 30 points a game in his final year, another Roslyn native, B.J. Bass, helped Beamon secure his scholarship at Manhattan, prior to Bass himself becoming an NBA agent.

Bass told The Roslyn News that Beamon is very much on the NBA’s radar and will likely be invited to participate in The Portsmouth Invitational Tournament, which is held in Portsmouth Va. after the NCAA tournament in April. There, representatives from all 30 NBA teams will be in attendance watching the top 60 seniors in the country play. Beamon will also likely be invited to participate in NBA Summer League in July, with an opportunity to make an NBA roster in the fall.

“I’m so happy for George,” Bass said, after traveling to Springfield to watch him play. “I don’t say this lightly, but he could not have done a better job representing our community both on and off the court during his time at Manhattan. Watching George, his coaches and his teammates cut down the nets in Springfield was really special.”