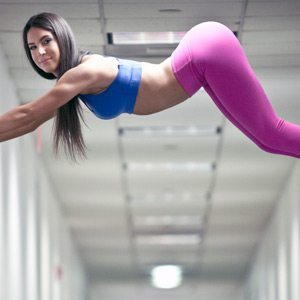 Roslyn native Jen Selter enjoyed 15 minutes of fame when People magazine featured her in an article exploring teenage plastic surgeries. Now, four years later, the 20-year-old is back in the spotlight and kept there by fans—more than 2.3 million of them on Instagram.

Selter’s followers, however, do not check her posts to see new pictures of her reinvented nose. Rather, they are interested in another one of her assets—the one on her backside.

According to recent interviews, Selter began working at a gym and took to exercising shortly after graduating from Roslyn High School. She soon noticed results, most notably in her rear end. Selter proudly took to Instagram, posting photographs of her newly sculpted body, and the public caught on.

In addition to her Instagram admirers, Selter boasts 284,000 Twitter followers and nearly 700,000 Facebook fans. She uses her pages to post sculpted selfies, workout routines and words of wisdom, such as, “Experience is a hard teacher. She gives the test first and the lessons later.”

On Sunday, a grateful Selter tweeted, “A year ago i would’ve never guessed life would be the way it is now.”

Selter’s figure graces the Mancave section of CBS’ website on a weekly basis, and WFAN’s Boomer Esiason and Craig Carton welcomed her to their show for an interview on Monday morning.

When asked what led her to the limelight, Selter didn’t skip a beat.
“I think I just have good social media skills … I was able to gain a huge following of pictures in yoga pants,” she said. “No one wants to see a picture of your food or your dog.”

Selter may be on to something. She told the radio hosts that companies offer $50,000 to $60,000 for product endorsements that typically include two written posts supporting the product and one photograph that captures her using it.

This fame begs for management, and as of last month, The Legacy Agency, Inc., took Selter on. The company is no stranger to success, with clients such as former Mets shortstop José Reyes, U.S. Olympic figure skater Sarah Hughes and quarterback-turned-sportscaster Troy Aikman.

Still, Selter hasn’t convinced everybody to admire her achievement.

“Too much … just seems outta balance,” said one Facebook member, commenting on a photo of Selter squatting while using two hands to dangle a weight in front of her.

Such comments, however, are few and far between. Most laud Selter as a motivating force or compliment her for sensational sex appeal, and for many 20-year-olds, this would be enough.

But Jen Selter has made it clear that she is unique in many ways. Her ultimate goal, as she explained to Esiason and Carton, is to be the next Jillian Michaels, “a fitness model who helps around the world.”

In the meantime, Selter continues to tweet self-empowering messages, such as this one posted on Saturday: “People try to expose what’s wrong with you, because they can’t handle what’s right about you.”