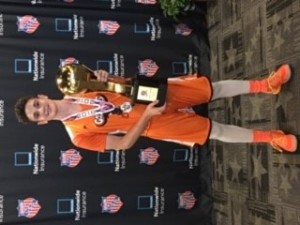 The New York City Gauchos is a basketball team based in The Bronx, one known nationwide for their prowess on the hardwood. Last weekend, The Gauchos added to their fame by winning the 2016 AAU 14U Division 1 National Championship at the ESPN Wide World of Sports facility in Orlando, FL.
But it wasn’t just players from that borough that lifted the squad to the title. Roslyn Heights resident Jonathan Hahami, a student at The Wheatley School and an AAU teen basketball player, also starred for The Gauchos, contributing heavily to the margin of victories in games played over several days during the weekend of July 30 to Aug. 1, ones that culminated in another gold medal for this winning team.
“It was an experience like no other,” Hahami said. “I am truly grateful to have been a part of it. Seeing my favorite college basketball teams compete in the NCAA Tournament in March, and then seeing the coaches of these teams watching my games a few months later was a dream come true. Not many players get that opportunity, so I am thankful to have had it.”
The Gauchos went into the nationals on the heels of a strong showing at the AAU Super Showcase, also held in Orlando. These games are important as they are played in front of coaches and scouts from top Division I basketball programs. In winning the title, The Gauchos held off the strongest talent of amateur players in North America, including the Atlanta Celtics, Georgia Stars, Detriot The Family, Southern Stampede, NorCal Finest, The Ville, Team United, BABC, Team Felton, Team Charlotte, Canada Elite, Team Penny and Team Loaded. Still, The Gauchos’ tradition of winning endured and Hahami’s own budding career has received a boost forward.
The Gauchos were formed in 1967 as an Amateur Athletic Union (AAU) basketball program, offering New York City area youth athletic programming, academic support and opportunities for lifelong success. Its afterschool AAU program is one of the most successful in the country, with four competitive divisions for boys and girls. Over the years, the New York Gauchos teams have won numerous local, national and regional championships. For the past half-century, thousands of New York Gauchos alumni have been accepted to elite colleges and played on championship basketball teams, including the 40 NCAA Division 1 student athletes in the last four years alone. In addition, 25 alumni have played in the NBA, including Hall-of-Famer Chris Mullin, Stephon Marbury, Kenny Anderson, Jamal Mashburn, Dwayne Washington, Russ Smith, Rod Strickland, Felipe Lopez and Kemba Walker. Top WNBA Gauchos alumni include Shannon Bobbitt, Pietra Gay, and Keisha Hampton