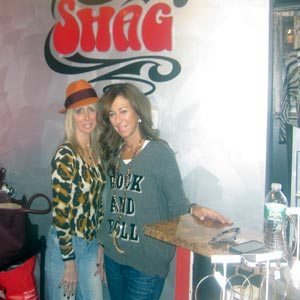 It is widely known that the day after Thanksgiving, “Black Friday,” is one of the busiest shopping days of the year. But since 2010, “Small Business Saturday” has become an increasingly popular day for both consumers and local mom-and-pop stores. The Village of Roslyn was bustling this past Saturday as shoppers took advantage of discounted prices and free parking in the downtown area.

“We have been busy all day,” said Jill Scherer, owner of Jill Scherer Ltd, a boutique that sells women’s clothes, makeup and gifts. “Since we opened this morning we’ve had a lot of customers come in to take advantage of our discounted items on sale.”

Ann Corn, co-owner of Shag New York, said that she had 20 percent more customer traffic than usual in her store.

“We sent out an email to all of our regular customers about the 30 percent off deals we are having for Small Business Saturday and we received a very good response,” said Corn. “We’ve also had a lot of new customers thanks to word of mouth and because of the free parking available.”

The free parking that she was referring to is a Roslyn tradition that allows for customers to park in the downtown area for two hours without having to feed the meters. Such free parking is in effect until early January, 2014. Needless to say customers took full advantage of the opportunity.

“It was a nice thing to have,” said Marcy Goldstein of Roslyn Heights. “I came here to take advantage of the discounts at the local stores and I found some very good deals today.”

Lauren Shapiro, of Roslyn came down with her daughter, Michel to shop at some of the local stores on Main Street and was happy with the discounted prices.

“I was able to buy some nice outfits for myself and for my daughter,” said Shapiro. “I hate going to the malls on Black Friday because of the traffic and overcrowded stores. It was nice being able to stay in the village to shop.”

Roslyn Chamber of Commerce President Lonnie Goldstein said that the local businesses are the lifeblood of the village and that it was essential to keep the customers coming in.

“We have a vibrant downtown and it is important to keep the village businesses thriving,” said Goldstein. “It is good to see everybody in business and that they are bringing people in.”

Chris Papazian who owns Roslyn Pharmacy said he saw a slight increase in sales based on customer receipts for the day.

“We did have a few customers who came in with multiple MX cards who took advantage of the day,” said Papazian. “We did not have a significant increase in sales on other items but a slight jump in sales.”