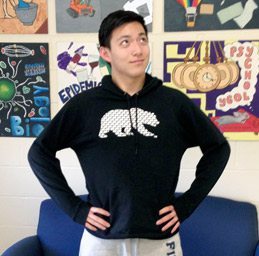 Roslyn High School senior Jerry Li was named a semifinalist in this year’s INTEL Science Talent Search. Jerry is one of 300 semifinalists from across the nation. Each semifinalist wins $1,000, and 40 finalists will be announced on Wednesday, Jan. 22.

Jerry was asleep at 7 a.m. the morning of Jan. 8 when his friends started texting him that he had been named a semifinalist.

“I did a celebratory dance walking into school,” said Jerry. His study, Strike a Pose: Power Posing and Academic Performance, was the first to show that power poses (i.e., positioning one’s body expansively) can improve performance on academic tasks.

“We are thrilled for Jerry,” said Dr. Weseley. “His study involved a lot of time and effort, and it’s really nice to see that pay off.”

Jerry, a competitive swimmer, initially planned to look at whether power posing could improve athletic performance. However, as a junior facing a slew of standardized tests, Jerry decided to turn his attention to the academic arena instead.

Interestingly, unlike previous research on this topic, Jerry found that power posing was more helpful to boys than girls.

That question will be left to further research.

—From the Roslyn School District