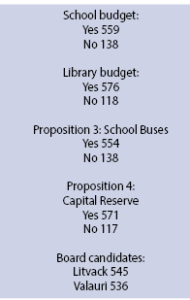 The budget called for a spending increase of 2.94 percent. The projected tax levy increased by 1.97 percent, the 11th consecutive year that Roslyn’s budget has been below the tax levy limit imposed by the state.

Superintendent of Schools Allison Brown said in a statement, “I never cease to be amazed and humbled by the support this community shows for its public schools. All of our residents should know that we are grateful for that support and do not take it for granted. Rather than make us complacent, a “yes” vote inspires us to work hard to earn the trust you have placed in us. We look forward with great confidence and anticipation to the 2019 school year.”

Along with the passing of the budget, two unopposed trustees were reelected. Steven Litvack received 545 votes and Bruce Valauri received 536 votes. Community members were also asked to vote “yes” to the purchase of school buses and vans for the district for a total of $457,014.08; as well as $7,400,000 from the 2015 Construction Capital Reserve Fund for the purpose of performing renovations. These renovations will include an update to playgrounds and surfaces at Harbor Hill and Heights elementary schools, an update to the high school science rooms and girls locker room, exterior and interior doors for the middle school, renovations of the gymnasiums at Heights Elementary and the high school main gymnasium, upgrades to the HVAC system at Harbor Hill School and drainage and irrigation of the fields at the Harbor Hill and Heights elementary schools.

In addition to the school budget, the Bryant Library’s budget was also on the ballot and was approved 576 to 118. Library Director Victor Caputo said, “The Bryant Library Board of Trustees, administration and staff wish to thank the Roslyn community for their continued support. We look forward to continuing to provide you, our patrons, with the excellent service you have come to expect from your library. You are the reason the library is the special place it is.”

The budgets go into effect at the start of the next fiscal year on July 1.