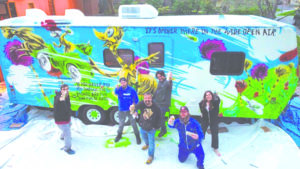 Local Roslyn resident and college student Max Miller, 21, recently completed interior renovations on a 2006 27-foot Fleetwood Wilderness travel trailer, turning it into a swanky, retro-inspired rolling bachelor pad RV that he will drive cross-country from New York to California. The actual RV, along with a digital diary of both the renovation and his journey, will be offered for sale as the world’s first NFT (non-fungible token) Art RV. Miller’s cross-country adventures will be featured on Instagram @MillerThymeTravel.

Starting in Sept. 2020, during what should have been his junior year as a computer science major at Chapman University in Orange County, CA, Max took a COVID-19 gap year and returned home to refill his parent’s empty nest. He took a job working for Game Truck Long Island, saved money and purchased the beat up travel trailer. With the help of his father, event designer and art enthusiast David Miller, Max spent the past six months remodeling the trailer, inside and out, with upgrades including a built in bar, two TVs, two fireplaces, LED lighting, a disco ball and shagadelic wallpaper designed by highly regarded Brooklyn-based glass mosaic and interior designer Allison Eden of Allison Eden Studios.

“I did a terrible job inspecting the trailer before I bought it,” Max said. “After tearing up the carpets we found rotted floors and soft spots due to water damage and we had no idea how to fix it. My father and I spent months watching how-to videos on YouTube, asking questions on RV Facebook groups and making countless trips to Harbor Freight and Home Depot for needed tools.”

To ensure that the exterior of the RV is as fabulous as the interior, the Millers enlisted the ;help of artist RZP (Robbie Z. Pelleiter) to paint the sidewalls of the RV with a Dr. Seuss“Oh, the Places You’ll Go!” travel-themed mural. The mural was painted in the driveway of the Millers’ Roslyn home. 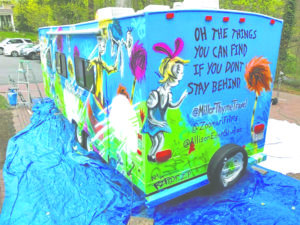 “When Max was little I always read him Dr. Seuss books and ‘Oh, the Places You’ll Go!’ was a favorite,” David said. “We brainstormed ideas for the exterior and we both agreed that we wanted a design that was fun and whimsical, but also incorporated a travel theme.”

“I just wanted something that would immediately make people smile when they saw it,” Max said. “Something people would want to take a photo next to. Something Instagram worthy. And, since I’m traveling alone, I also wanted a design that would get noticed and ;help me meet fellow travelers.”

According to the Millers, Dr. Seuss has an added connection to this project. Artist RZP shares the same March 2 birthday as Dr. Seuss and designer Allison Eden grew up around the corner from Dr. Seuss in La Jolla, CA.

“I played in front of his house and I’m pretty sure that the little girl named Sally, from ‘The Cat In The Hat,’ was based on me,” Eden said.

Max and David documented the entire renovation and they have now enlisted the help of five-time Emmy award-winning director/ cinematographer Marc Bloomgarden of Zoomari Films to shoot RZP painting the exterior. Max then plans to document his adventures through photos and drone video at every stop the RV makes, posting daily on social media so people can share his journey virtually. Max plans to visit scenic destinations like Zion National Park, The Grand Canyon and Yosemite, as well as major cities including Miami, FL New Orleans, LA and Austin, TX. When he reaches California, the collection of digital media will be sold as an NFT, along with the actual RV “as-is,” in whatever condition it’s in after the journey.

“Not everyone is lucky enough to be able to spend a few months on the road, but whoever buys the NFT will be able to share the experience virtually though my collection, and possibly have some adventures of their own in the NFT Art RV,” Max said.

Being obsessed with all things tech, Max closely follows the NFT market.

“One common trait amongst many of the highest selling NFTs is that they are not just collectible GIF and JPEG images, they also come with physical items,” Max said. “Artist Beeple’s NFT collection, which recently sold for $69 million, came along with a token, a digital frame and a lock of his hair.”

He added, with candor, “That’s what inspired the idea to turn this rolling piece of art into the world’s first NFT Art RV. That and the fact that even though this has been the biggest year in RV sales history due to COVID, I went so over budget on the renovation that I will never get my money back any other way.”

This is not the first big project Max and his father have taken on together. While Max was in high school, they teamed up to raise nearly $1 million dollars to launch the Sunrise STEAM Shack, a program that teaches robotics, 3D printing and computer programming to kids with cancer.

Max plans to depart New York with his one of a kind NFT Art RV at the end of April. 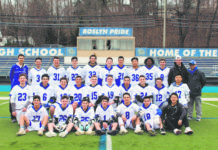