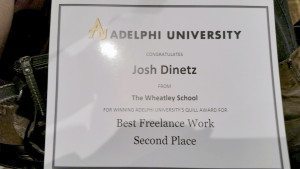 Josh Dinetz, a junior at The Wheatley School, won a Quill Award from Adelphi University for Best Freelance Work, second place, for the first article he had ever written for The Roslyn News.

On Wednesday, March 25, Adelphi University hosted the annual Quill Awards, a ceremony that acknowledges some of Long Island’s best high school journalists. This was an especially exciting day for Anton Media Group contributor Josh Dinetz, who had been nominated for Best Freelance Work for his article, “Day of Service and Learning.”

Dinetz is currently the managing editor of Wheatley’s newspaper, The Wildcat, which won first place for Most Outstanding Newspaper.

The junior dreams of becoming a journalist in the future and one day, being on the morning news.

When asked about the award, Dinetz said, “I want to thank my family for their support, Anton Media Group for allowing me to publish some articles, Sheri ArbitalJacoby, senior managing editor, for getting me started at Anton, The Wildcat staff and advisors JoBeth Roberts and Jen Fatone for helping me know all I do about journalism, and my parents who never discouraged me from watching the news, even during the worst of times. Without that, I never would’ve known what was happening in the world and want to be like the men and women on TV reporting in distant places or close to home in the city.”

Congratulations, Josh! May this be the first of many journalism awards.