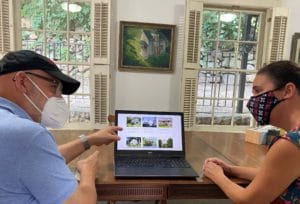 Roslyn Landmark Society was productive during the pandemic creating a new website as a result of donations from trustees Catherine Chester, John Flynn, Howard Kroplick, John Santos and Craig Westergard, and grants from the Gerry Charitable Trust and the Robert David Lion Gardiner Foundation.

Roslynlandmarks.org which launches this week features a treasure trove of historic information on over one hundred 17th and 18th century homes in the Village of Roslyn and nearby communities. Landmark president Howard Kroplick who spearheaded the project said, “we wanted a site where residents, historians and students could easily learn who designed these historic properties, the impact their notable owners had on Roslyn and how that was woven into the fabric of an early American village.”

Comprehensive information on restored homes, businesses, churches, schools, and statuary can be found on the Projects page. “Our vast archive of digitized photography and historic documents formed the digital narrative for 130 properties” said Roslyn Landmark Society Director Jennifer Lister who added, “in the future, we’ll update the site with even more historic projects.”

A total of 42 Roslyn Landmark Society Annual House Tour Guides is also posted on the site. Masterfully written by local historians, architects and landmark members, including founder Dr. Roger Gerry, the guides include fascinating accounts of the original homeowners and original architectural details.

For additional information about Roslyn Landmark Society and the website, please call Jennifer Lister at (516) 625-4363 or email rlsinfo@optonline.net

Founded in 1961 by Dr. Roger and Peggy Gerry, the Roslyn Landmark Society is a 501 (c)(3)  organization whose mission is to provide education, restoration and preservation of historically significant buildings, sites, and decorative elements which document the rich heritage of life and progress in Roslyn and the surrounding historic communities on Long Island.