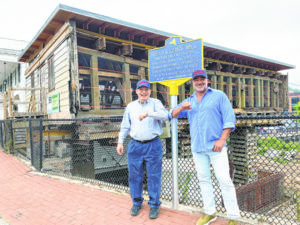 Santos will serve as co-president/secretary. He is a Roslyn resident who instantly fell in love with life in the village 30 years ago. With expertise in design and restoration, Santos and his company, Island Contracting, have restored more than 30 historic buildings. He personally purchased and restored more than 15 historic buildings. Santos, his wife, Michelle, and two daughters live in the Obadiah Washington House (circa 1835), the former home of the founders of Roslyn Landmark Society Dr. Roger and Peggy Gerry. He has been a Board member since 2002.

“Over the years, Howard and I have successfully worked together on many projects,” Santos said. “I look forward to becoming more involved with the organization’s daily activities and to also utilize my knowledge in historic restoration to assist the society and the Village of Roslyn.”

Kroplick will serve as co-president/chairperson of the Executive Committee. President since 2018 and a trustee since 2011, he has led the organization’s focus on restoring and preserving the Roslyn Grist Mill and historic places in the community. Acknowledging the value of social media and outreach during these challenging times, Kroplick has placed an emphasis on upgrading the Society’s website, resulting in expanded knowledge of Roslyn’s history and increased memberships and sponsorships. An East Hills resident and co-owner of the Waterfront at Roslyn building, Kroplick is a registered New York State historian. From 2012-19, he was the town historian for the Town of North Hempstead. In 2016, he was awarded the Edmund J. Winslow Local Government Historian Award for Excellence.

“It’s been a real honor to serve as president over the last three years,” Kroplick said. “I look forward to working closely with John Santos and continuing our historic restoration, preservation, and marketing efforts.”

The terms for six trustees who had served for three years had also ended. The Board unanimously appointed five trustees, John Flynn, Howard Kroplick, John Santos, Dr. Robert Sargent and Craig Westergard, to one-year term extensions. After serving ten years as a trustee, Jay Corn decided not to extend his term. On behalf of the trustees, Kroplick thanked Corn for his long-term service and wished him well in his future endeavors.
Roslyn Landmark Society is currently seeking new trustees to join the Board.

“Diversification and expansion are currently underway, and I’m committed to help make this happen,” Jordan Fensterman, the chairperson of Board Development and Membership Committee, said. The Board meets via Zoom on the first Monday of the month. The society encourages any member interested in joining the board to contact Jennifer Lister at jennifer@roslynlandmarks.org or call 516-625-4363.

You can visit the website at roslynlandmarks.org to learn more about the organization, latest Roslyn news and profiles on more than 235 historic properties. The website has been supported by grants from the Gerry Charitable Trust and the Robert D.L. Gardiner Foundation.

—Submitted by the Roslyn Landmark Society