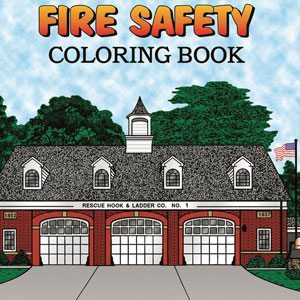 Colorfully Yours is a customized coloring book company that specializes in educating kids on fire prevention, recycling and emergency preparedness. Included are books with covers illustrating both Roslyn Rescue and Roslyn Highlands fire departments.

Joe and Debbie started the company 25 years ago out of their Hicksville home when, as the saying goes, “necessity became the mother of invention.”

It all started at the Westbury Fire Department’s Memorial Day picnic in 1988, where Joe was a volunteer. An emergency call came in for a “big-signal-ten” building fire. Most of the men at the picnic raced to the scene of the fire, while the women stayed behind to occupy the children.

That’s when Debbie, a professional illustrator, had a brainstorm. “I told Joe maybe I could do a coloring book all about the Westbury Fire Department to teach kids,” explains Debbie. Joe approached the Westbury Fire Chief who was all for it. So Joe and Debbie got to work.

It was the perfect marriage of their backgrounds, with Joe’s years in the Fire Department, and Debbie’s as a professional art illustrator.

“I had all the information about fire safety, and Debbie drew and wrote it,” states Joe. That first coloring book featured a personalized drawing of the Westbury firehouse in addition to the company’s own fire trucks and an abundance of fire safety tips to educate children.

Within a month the Lindners got a call from the Hicksville Fire Department asking for its own customized coloring book. “That’s when I knew we were on to something,” says Joe.

Before long, the Lindners put out a mailing and with their young daughter Jennifer in tow, went knocking on firehouse doors Sunday mornings, which is when Joe knew fire department meetings were held. Slowly they built up their clientele.

As the company grew there was no slowing down for either of the Lindners, who both maintained full time jobs outside of the company; Joe as a New York City Police officer, and Debbie as an art illustrator, a job she stumbled upon on her path to her first dream of becoming a veterinarian. “When I was in college all my professors had me illustrate their classroom presentations and told me I should be a medical illustrator,” says Debbie.

She took their advice after returning home from college and landed her first illustrator job. Never one to “sit still,” she simultaneously joined Roslyn’s Air National Guard unit, following in the footsteps of her father.

It was there she met Joe, who was also in the Air National Guard after serving in the Air Force. The couple, who describes their 1983 meeting as “love at first sight,” were married within a year, settling in Hicksville where they operated Colorfully Yours out of their basement. By 2000, they outgrew their home based operations and moved to their current facility in Bay Shore.

Around 2008 when many companies were dealing with a lagging economy, both Joe and Debbie faced additional health issues, Debbie with systemic lupus, and Joe with cancer, from his days working at Ground Zero in the aftermath of 9/11. Joe is in remission and Debbie has stepped down from her role at the company but remains co-owner and acts as creative consultant on a pro-bono basis.

To date, the company supplies coloring books and kits to 75 percent of Long Island’s Fire Departments, and several out of state markets. In 2010 they expanded beyond firehouses, with custom coloring books for local sanitation departments, water districts, and one for Nassau County about disaster preparedness.