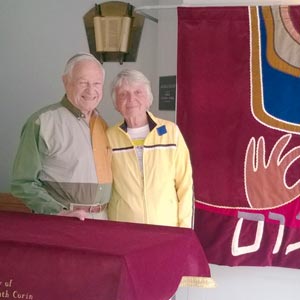 With a landmark 60th wedding anniversary on the horizon, longtime Roslyn Harbor residents Ben and Lucy Corin gave great thought to how to best mark such an auspicious occasion.

They plan, of course, to celebrate with family members. But for the Corins, family also means the community at their spiritual home, Congregation Tifereth Israel (CTI) in Glen Cove. So they decided to honor the memory of their parents by commissioning a parochet or ark cover to be installed in the synagogue’s sanctuary.

At the parochet’s official installation, the CTI community thanked the Corins for sharing their special anniversary in such a profound way and for presenting the congregation with such a magnificent gift.The Corins awarded the commission to Best Embroidery and then worked closely with the company owner on the design to assure that the parochet would be a welcoming and meaningful presence in the sanctuary. The design that resulted encompassed the main themes of a Menorah — a basic symbol of Judaism — and hands, recalling a priestly blessing, and also a greeting of welcome and good wishes.