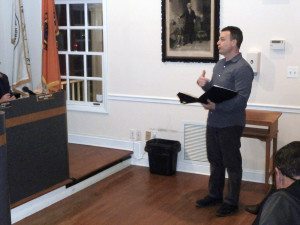 At the most recent meeting of the Village of Roslyn board of trustees, Ken Fabricant of Fabricant and Fabricant Co. (F & F), submitted an application to the board for an expansion of their business, currently at 1251 Old Northern Blvd.

Fabricant is seeking a special use permit to expand to the second floor on the business. Accompanying him at the meeting were two architects.

The firm was founded by their uncle in 1961. Fabricant has described the insurance industry as being very competitive. Since the business, Fabricant said, is bringing in $40 million a year, it is seeking a special use permit to obtain the board’s approval of a plan to build a second floor.

Their current first floor is used for Fabricant’s offices. The proposed second story floor will be used for similar purposes. The first floor has dimensions of 2,700 square feet, with the second floor planned to be around the same dimensions.

After listening to the arguments made on behalf of Fabricant and Fabricant, board members decided to postpone its decision to a future date.

Besides getting the board’s approval, the project needs to get the approval of the Historic District Board and the Zoning Board. The planned upstairs addition must conform to their rules and regulations.

When one thinks of the Roslyn Main Street area, retail businesses are what come to mind. There are, in fact, several clothing stores, boutiques, a bakery, several restaurants and a flower shop.

But Fabricant and Fabricant is one of the exceptions: Perched on Old Northern Boulevard, opposite- Village Hall and next to Hendrick’s Tavern, the company represents several insurance firms, which write policies on behalf of Fabricant’s customers. According to Fabricant, approximately 90 percent of F&F’s business is commercial, with the balance involving individual consumers.

The various types of wholesale insurance sold to businesses include:

• General liability insurance covers legal hassles due to accidental injuries and claims of negligence. These protect against payments as the result of bodily injury, property damage and medical expenses.

• Product liability insurance protects the company against financial loss due to a defective product they manufacture that causes injury or bodily harm.

• Commercial property insurance of all types.

• Property insurance covers everything related to the loss and damage of company property due to a wide variety of events such as fire, smoke, wind and hail storms.

Also at the March meeting, the board approved the Legal Notice Publication dates of April 1, April 8 and April 15 for Village Tax Lien Sale
to be held on April 23. The items
or property sold are those seized
by the Village, after legal process,
for failure of the owners to pay taxes.

A resolution was approved of the payment from the Sanitary Water Main Cleaning Co. in the amount of $349,263.03.

According to the Village Attorney, John Gibbons, the sewers in the village are not in good shape. He also said that the sewers and equipment are in the process of being realigned. The work, he said, should be completed in a couple of months.