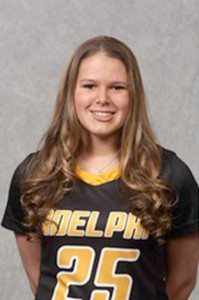 As Roslyn School District teachers and students enjoyed the spring break last week, there was no activity on the spring sports front. And so, The Roslyn News took a look at local athletes, who starred at Roslyn High School and are now continuing their athletic endeavors in college and at the professional level.

When former Roslyn High School basketball and lacrosse standout Allison Schneider matriculated at Adelphi University, she knew she was signing onto the top female lacrosse program in America. And that, happily enough, has turned out to be the case. As of press time, the Lady Panthers are sporting a perfect 11-0 record. One of their latest wins was a convincing 20-3 victory over American International College. Schneider had a second half assist in the win, as she starts her career at Adelphi with limited, but effective, playing time.

Meanwhile, on the basketball courts, former Roslyn High School and Manhattan College basketball star George Beamon, has finished his first year with the Oklahoma City Blue, a National Basketball Association (NBA) D-League affiliate of the Oklahoma City Thunder. Beamon was chosen in the third round of the 2014 draft.

According to Keith Schlosser of SB Nation, Beamon was the “odd man” in the Blue’s plans for 2014-15 and beyond and so was recently released by the team. But that should not be the end of his fledging professional career. Beamon has come back before. He missed a good part of his junior year at Manhattan College with an injury, but then came back in his senior year to lead the Jaspers to a MAAC championship and their first NCAA tournament appearance in a decade.

“I remember when local high school scouting services said George wasn’t even a Division I player,” said BJ Bass, East Hills resident and an agent with RBA Sports in an interview with Schlosser. “He went on to become one of the best scorers in the country at Manhattan, leading them to the NCAA tourney—and finishing as one of the school’s all-time leading scorers.”

“What makes George an NBA prospect, in my view, is that in addition to his uncanny ability to score anywhere on the floor, he is a dynamic rebounder and defender from the guard position,” Bass added, noting that Beamon averaged 6.5 rebounds as a senior, complimenting his offensive skills that made him the fourth leading scorer of all time in Manhattan College basketball history.