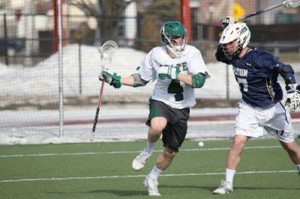 Roslyn resident Brad Rapone continues to play a key role in the winning ways of the Farmingdale State men’s lacrosse team. With the Rams trailing Mount Saint Mary, 4-2 in the second period, Rapone scored an important goal that helped to get Farmingdale back into the game. After a Mount Saint Mary’s goal, the Rams offense took over, scoring seven unanswered goals to take control of the game, which they won by a 17-11 margin.

Senior attack Philip Schaefer of Holbrook scored five goals and had three assists, while freshman attack Michael Cegielski of Somers, NY recorded six points on four goals and two assists to pace the Farmingdale State offense. Cegielski scored 19 seconds into the third period and Schaefer followed with a man-down goal to extend the lead to 12-5. The Rams led by as many as nine in the fourth period while on the way to a win that gave that extended their record to 7-6.

A junior at Farmingdale State and a former Roslyn High School star, Rapone has 13 points overall this year, including six goals and seven assists. His shots on goal percentage is 64 percent overall and 54 percent in conference play.