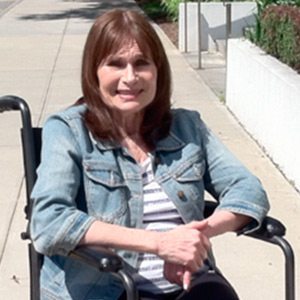 However, three years ago, she was struck with a dehabilitating stroke. According to family members, Altman could not speak or walk and doctors were highly pessimistic about any kind of recovery.

But Altman, so far, has proved the doctors wrong in spectacular fashion. She is able to talk and communicate and now has set her sites on a full recovery all to the point where she hopes to return to her teaching position at Roslyn High School.

In the meantime, the Roslyn community has responded with their usual generosity. In January, Roslyn High School held a Charity Benefit Fashion Show. Last week, the Roslyn School District presented Altman with a $2,000 check from that successful event to help along with the recovery process.

A month ago, the school district also held a fashion show fundraiser. Roslyn High School students are raising money however they can, soliciting with “cups for change” at the school and throughout their home neighborhoods.

Last week, Altman and her friends and family members met with high school students from various clubs at the high school to receive both encouragement and any needed funds. They were greeted with good cheer by school administrators, teachers and students alike. In all, 90 students came by to wish Altman well and to pledge to continue their fundraising efforts.

The club dates were set up by Gail Aronoff, whose daughter, Jill, was a student of Altman’s.

“The goal is to raise enough money to send Stephanie to an intensive speech therapy program for people with aphasia,” Aronoff said. “We are hoping to help her overcome the aphasia that she suffered from the stroke.”

Aphasia is described as an acquired language disorder due to brain damage. According to experts, aphasia alone does not affect a person’s intellect, memory, judgment, or problem-solving skills.

Altman’s condition, naturally, was an ordeal for her family. Her husband, Frank, had to sell his liquor store in Port Chester just to spend more time with his wife. But like everyone else, Frank Altman is amazed with his wife’s progress.

“She’s phenomenal,” added Gail Weitzman, Altman’s speech therapist at LIU Post. “[She’s] the only one that doesn’t give up.”