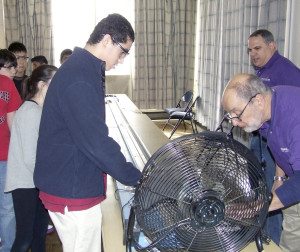 Students in Mr. Sherry’s Technology 7 class and Mr. Cangero’s Technology 8 class at Roslyn Middle School competed at the Brookhaven National Laboratory (BNL) Maglev competition in March. Middle School students have been competing in this contest for the past 16 years. The selected students were winners of time trials held in their classes, and also had to complete a design portfolio that is read by scientists and engineers at BNL.

Sherry’s students competed against eight other schools in the Wind Powered category, in which students constructed a maglev vehicle using a sail to capture the wind produced by a fan to propel the vehicle down the track. Those students were Yasin Badawy, Anthony Berrezueta, Austin Clive, Madeline Groothuis, Reed Rosen and Alex Tran.

Cangero’s students competed against eight schools as well, but their maglev vehicle was propelled by an electric fan mounted on the vehicle. Part of the design challenge was engineering how the vehicle would receive its electricity from the electrified track. Those students were Peter Ackerman, Bryan Bibicheff, Ben Heller, Ashley Na, Priscilla Pang and Jay Wiebe.