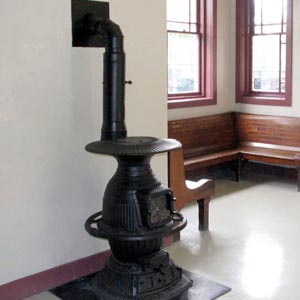 Since 2003, a potbelly stove has graced the Long Island Railroad (LIRR) Roslyn station waiting room. Restored by the Friends of Locomotive #35, it was given to the Roslyn Preservation Corporation (RPC) who lent it to the LIRR to use as a reminder of how the station looked originally. The stove disappeared sometime in 2009 and after a preliminary investigation Dave Morrison, LIRR historian is trying to find out what happened to it.

Oyster Bay resident John Collins, now a freelance preservation consultant/designer told Dave about the loss of the potbelly stove at a recent meeting of the Oyster Bay Railroad Station Restoration Committee, of which Morrison is the chair. Morrison said, “I asked John how the stove was and he said, ‘gone.’”

Morrison hopes that someone using the station might have seen people removing it and asks for help. If you have some information, please call Dave at 935-3145 or email him at daverail999@gmail.com.

Morrison purchased the stove from John Reinwald of Center Moriches on January 26, 2002 and with the help of Steve Torborg, Wayne Beers and Mike Efthymiou of the Friends of Locomotive #35 they brought it to Wayne Beers home garage, where he and Mike sandblasted, primed and painted it.

Mike welded on one of the legs that had been broken, and when he and Wayne finished their work, the stove looked beautiful. It is similar to what the Roslyn’s station waiting room originally had. Early photographs of the building show a slender chimney for the smoke to escape.

When permission was given by the LIRR to install the stove it was placed on long-term loan to the Long Island Rail Road for display in the Roslyn Station waiting room.

The guys from Locomotive #35 moved the stove into the Roslyn Station waiting room, it was on long-term loan from the RPC, and after placing it upon a metal plate, they filled the stove with track ballast to weigh it down, in order to hopefully prevent unauthorized removal,” said Morrison.

On April 26, 2003 a brief dedication ceremony was held at the stove and the event was reported in the May 9, 2003 edition of the Roslyn News.

Morrison said, “A second station to get a potbelly stove was Greenlawn Station.  Upon the 1997 restoration of the building, LIRR Bridge & Building Foreman Paul Proctor donated a potbelly stove to the LIRR and placed the stove in the waiting room.  That stove looks beautiful today, next to a bookshelf that one of the B&B crew constructed on his own time at home.”

The third station to get a stove was Port Jefferson.

“I purchased that stove in 1999 and donated it to the Port Jefferson Historical Society.  It was placed inside the waiting room. During the 2001 station rehabilitation, a brick base for the stove to sit upon was constructed in the northeast corner of the waiting room.”

The fourth station to get a stove was Roslyn.

Dave Morrison is hoping someone will come forth with information about what happened to the potbelly store. Morrison said, “A great deal of loving care went into placing this beautiful antique into the waiting room at Roslyn Station.”

Morrison, retired from his position as the LIRR Oyster Bay branch manager knows his way through the system. He checked with retired Branch Line Manager Paul Bisono, and learned that the stove most likely “disappeared” toward the end of 2009. Bisono recalled contacting the LIRR Bridge and Building Department saying the door was loose and asking to have it repaired.

Bisono said he hadn’t been there for a few months, and when he did, the stove was gone,” said Dave.

Dave visited the B&B, now in Bethpage, with photos of the stove asking if anyone could remember it, and its being removed for repairs in 2009. Moving the stove was not going to be easy since Morrison and Beers filled the stove with ballast so it weighted a “ton.” It would have to be emptied before it could be put on a truck and taken away.

“It would have taken a few people and a truck to get it out,” he said, which is why he is hopeful that someone will have information to share with him.

Dave summed up his quest saying, “Upon making numerous inquiries to the LIRR, nobody knows anything about the stove.”

He added, “I would hate to see one of the potbelly stoves at Greenlawn, St. James or Port Jefferson ‘disappear’ one day.”

Readers are being asked if they have any information on the stove’s disappearance. That includes Oyster Bay commuters, as they travel through that station on their way to and from New York.

And as for Oyster Bay, it too has a mystery. The station originally had a fireplace. The hearth remains but the mantel and front columns are no longer there. Hopefully someone has a photograph or other information on what the fireplace looked like so that one day it too can be restored.

There are three LIRR stations with fireplaces and they are all on the Oyster Bay Branch Line. The one at Glen Street has a fireplace restored by the LIRR with a mantle. At Glen Cove there is a beautiful fireplace but it was walled over on the west end of the waiting room and now the area is like a supply room or storage room.

“If you are a cleaner you can see this beautiful piece with its columns and mantle. There had been plans to open the wall to view it but that never happened,” said Morrison.

The third fireplace is that in Oyster Bay, and it is the second mystery Morrison is trying to solve. If you have some information, call Dave at 935-3145 or email him at daverail999@gmail.com.