They do things differently in Roslyn.

It’s a village that begs to have the prefix “historic” to it, and has managed to keep its historic character while other places on Long Island have lost theirs.

Roslyn boasts an historic district on the National Register of Historic Places. It has an Historic District Board (HDB) that has jurisdiction over every aspect of construction and alteration.

A developer looking to place a luxury senior housing complex will need a unique architect to ensure that the project meshes into Roslyn’s historic setting.

Forest City Daly found the right designer for the task.

Robert A.M. Stern is an acknowledged master of the so-called “post-modern” style and head of the practice bearing his name (RAMSA). His firm shared design duties with SLCE Architects, also based in Manhattan.

Paul Mason Dixon, a RAMSA spokesman and author of several books on Stern’s corpus, told Roslyn Magazine that Stern was involved in the Atria’s basic design conception, along with partner Paul Whalen. 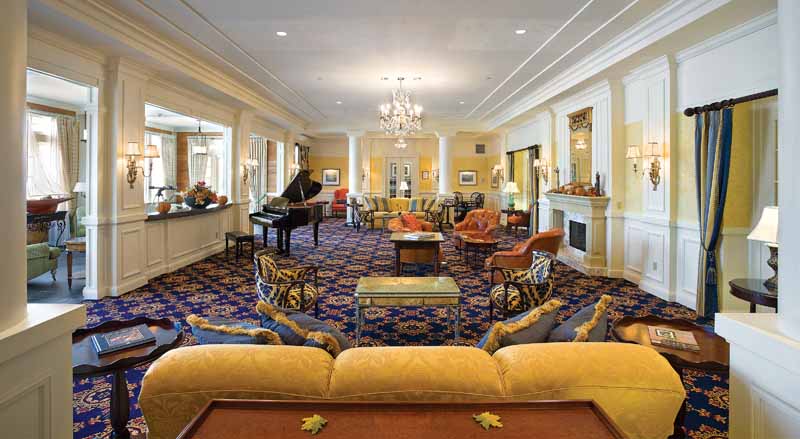 In an introduction to one of Dixon’s books, the architectural historian Vincent Scully noted that Stern’s buildings “are not normally intended to stand out as isolated or remarkable objects. Instead, they are designed to be seen as incremental enhancements or reinforcements growing out of the existing character…of the place itself.”

Asked about the challenges of building in Roslyn, Dixon replied, “Our firm is frequently called on to design buildings that will fit into historical contexts. Our practice is premised on the belief that the public is entitled to buildings that do not, by their very being, threaten the aesthetic and cultural values of the buildings around them. We believe in the continuity of tradition and strive in our work to…[enter] into a dialogue with the past and with the spirit of the places in which we build.”

He added, “The Landing Road site offered unparalleled vistas of scenic Hempstead Harbor and proximity to the [village’s] historic district and its dining, shopping, and recreation opportunities. The project…provided the community with a new waterfront park, re-establishing a clear connection between the downtown and the harbor that had been lacking for generations. The building reinforces the historic character of Roslyn with a composition that echoes the prevalent colonial, colonial revival, and classical revival language of the village’s historic houses.”

The Atria had a somewhat difficult path to completion, officially opening on June 27, 2007. Ten years earlier, Forest City Daly bought the foreclosed, environmentally contaminated 11 acres for about $1 million and spent $2.5 million to clean the polluted waterfront site.
The developer then set about the process of getting its $65 million project through the village’s approval process.

In 1999, the project passed muster with the village’s Board of Trustees, Zoning Board of Appeals and the Planning Board.

A year later, the complex—which began under the Sterling Glen senior/assisted living brand before its sale to Atria Senior Living in 2009—received the nod from the HDB.

An article in the Oct. 26, 2000 edition of The Roslyn News noted that, “During the past year, most HDB questions, including those from [Roslyn] Landmark Society members, have come over height variance issues.”

In an interview with the New York Times, RAMSA partner Paul Whalen said the design mitigates the three-story height (a main criticism) “with various-sized wings and porches and a series of raised and lowered pitched roofs….We are taking a turn-of-this-century look at colonial revival and classical revival that is typical of this village.”

Since the building is visible from the viaduct carrying Northern Boulevard, the village also expressed concerns about the vistas, and Michael Daly, the main developer, said in an interview that “the roof was designed to be attractive” and “all the mechanical equipment is to be out of sight, and kitchen exhausts will be hidden in brick chimneys.”

Dixon said RAMSA “participated in at least two presentations to the Roslyn Planning Committee and in addition had some dealings with Roslyn’s Architectural Review Board…Our strategy for the massing and architectural expression of the building was well received.”

Atria on Roslyn Harbor will be 11 years old this year. It’s a good bet that it will become a modern classic in the fabric of Roslyn’s historic quilt.