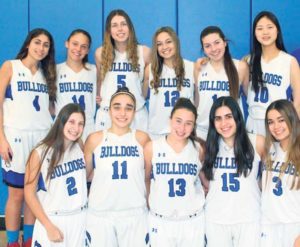 The 2018-19 regular season has come to an end and for both the Roslyn High School boys’ and girls’ varsity squads, exciting playoff actions is next.

As of press time, the schedule for this weekend’s games were not available, but information can be found this week at our website, www.roslyn-news.com.

For both squads, the playoffs look promising. The boys’ team finished off a winning regular season with a 59-52 home win over Hewlett. In the win, Saleh Johnson had 20 points to pace the Bulldogs attack. Roslyn jumped out to a 21-10 first quarter lead and played even with Hewlett for the rest of the contest, with Craig Murphy’s charges putting the lid on any comeback by the visitors. The Bulldog attack was spread out, with eight players in the scoring column. Once again, three-pointers played a huge role in the win. Johnson knocked down three treys, Jacob Levy and Eli Weiner had two each and Spyro Drenis and Noah Rosenthal each contributed a bucket from the three-point zone.

The win was Roslyn’s third consecutive triumph. For the regular season, Roslyn had a 9-4 record in conference play and an 10-8 record overall.

The girls’ also had a winning season, finishing with a 10-8 overall mark and a 8-6 record in conference play. Roslyn closed out the regular season with an impressive 62-57 overtime road win over Hewlett. Emily Cohen and Liana Drenis, the Lady Bulldogs two top offensive stars all season, came through again, scoring, respectively, 23 and 12 points each. Going into the final frame, Hewlett held a 47-41 lead. Roslyn bounced back, tying the score in the closing minutes, while pulling away to a 9-4 advantage in overtime. Let Noreen Naughton, the head coach, describe the action. “[With] 30 seconds left In regulation, we were down by three points. Emily Cohen scored on a post move. Hewlett had the ball and we were forced to foul to stop the clock. We foul and send Sam Panzarella to the line. She makes one out of two. With 12 seconds left, Emily Cohen and Ariana Matarangas run a pick and roll. Emily scores on the roll to tie the game. In overtime, we went up four on a three-pointer by Amanda Bruck with two minutes left in overtime Roslyn has a three-point lead with 30 seconds left. Emily Cohen scores a layup on the next possession to put Roslyn up by five.”

The win avenged a earlier 64-50 overtime loss to Bethpage. The Lady Bulldogs made a spirited comeback in the final frame to send the game into overtime, but the Bethpage defense proved too much, doubling and triple-teaming Emily Cohen to prevent a run by the home team.