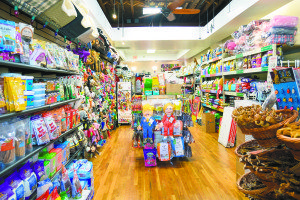 Pet stores are not typically synonymous with politics, but if this election year has proven one thing, it’s that anything is possible. Manhasset’s Pet Boutique on Park Avenue has entered the political arena by selling dog and cat toys that resemble the biggest presidential hopefuls in the game this year such as Donald Trump, Hillary Clinton and Bernie Sanders, and they have been flying off the shelves.
“I sold 840 of each in a matter of two weeks,” said Maxwell Beretsky, owner of Pets Boutique. “The moment we put this on Facebook and word spread, I couldn’t keep up with the orders.”
Beretsky began selling these toys in the last week of July after the company who produces them, FUZZU, reached out to him. FUZZU currently sells Trump, Clinton and Sanders toys in varying sizes, all of which are created and produced in a design studio in Vermont. The company reached out to other similar boutique-type pet stores, but many initially had concerns that selling such products would create too much of a controversy and upset customers.
“I’ll tell you, in the store it causes a lot of stir where one customer is buying Hillary, another one is buying Donald, and they’ll start arguing here,” said Beretsky. “We had arguments almost every single day at one point.”
Though some customers may get politically charged from time to time, people have been coming from near and far to get their hands on these toys, whether it be for themselves or their pets. There has also been an abundance of online and phone orders since Pets Boutique began posting pictures of satisfied customers to the company’s Facebook page.
“One third of my sales are from people who don’t even have pets, and when people do buy this toy, they usually buy it for themselves, for their friends and for their families,” said Beretsky. “On average we sell four toys per one customer.”
Beretsky never anticipated that these toys would gain such widespread popularity, initially buying just a case of each. Within just two weeks, the toys were already on backorder, causing Beretsky to have to quadruple his following order from FUZZU.
To his surprise, Beretsky has noticed that the toy bringing in the greatest volume of sales and selling the quickest has been the Bernie Sanders model. Beretsky has a dog of his own, a terrier mix named Big Bob, for whom he has bought one of each. Though Big Bob takes turns with all three toys, his personal favorite is Donald Trump.
“He loves Donald,” said Beretsky. “He sits there and licks his hair all day long.”
Though the addition of the political toys has driven recent sales upward, it is Beretsky’s love of animals and dedication to his business that has maintained the store’s success for the past 16 years. He first opened the store on Plandome Road, until he relocated to Park Avenue six years ago. The store not only sells pet supplies and toys, but also provides dog grooming services in the basement.
“All day I play with dogs, this is the greatest job ever,” said Beretsky. “I come home with a smile on my face everyday.”
Beretsky does not expect a decrease in sales anytime soon. In fact, he predicts sales will continue to increase exponentially in the months leading up to the election in November.
Pet Boutique is at 8 Park Ave. For more information, call 516-869-3378 or email petsboutique@aol.com.