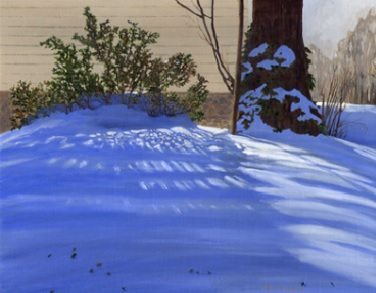 It is never too late to make your dreams come true. Just ask Aleta Crawford, who spent most of her adult life in the medical field, but never gave up on the dreams she kept hidden deep within her heart.

“I always wanted to be an artist,” said Crawford, who will be a featured artist at an exhibit opening Jan. 3 at the Sid Jacobson Jewish Community Center Art Exhibition in East Hills, where more than a dozen of her paintings will be shown. Although she lives in Manhasset, Crawford is well known in Roslyn as a parishioner and choir member at Trinity Episcopal Church.

From the time she was a little girl growing up in Ohio, Crawford could be found constantly doodling and drawing. She wanted to pursue a career in the arts, though her mother had other plans for her future.

“My mother wanted me to be a registered nurse because it was more practical,” Crawford said.

So, the dutiful daughter earned her nursing degree from Dartmouth College.

By the time she graduated, she had landed a job as an R.N., and was married to her high school sweetheart Jim, a doctor. The two settled in Massachusetts, where they raised a son and a daughter.

Crawford left her job as a nurse to stay home and raise her children until they reached middle school. Then, around 1985, she returned to work, once again in the medical field, this time as a lab technician. She spent seven years working in the lab with great accomplishment, most notably when she helped to characterize how the human liver is constructed.

“To this day, everyone quotes my work,” Crawford said proudly.

Despite her achievements in medicine, the artistic dreams were still longing to come out. By the time she was in her mid 30’s Crawford could no longer keep her inner artist silent.

“I wanted to do my art, but realized I needed training,” she said.

Enrolling at Northeastern University, she earned a certificate in Graphic and Visual Design. And when she discovered painting, her “inner artist” was thoroughly released, and there was no stopping her.

“I realized I absolutely loved painting,” she said, and signed up for a new round of courses to hone her technique.

As she pursued her passion, she and Jim relocated to Florida in 1998 for a job opportunity he received. By then, their children were grown, and Crawford painted steadily.

In 2008, another job opportunity came her husband’s way, and it brought them to this area, where they have lived since. Much of her original artwork adorns the walls of her home.

“I love the treed landscapes here,” she said.

Crawford quickly joined the local art world, renting studio space at the Art Guild of Port Washington, where she also holds a treasurer position. Among her artistic peers, Crawford has thrived, busily painting more than a dozen new pieces each year.

Long Island’s beautiful landscaped settings have inspired most of her recent work. A favorite spot is Caumsett State Park in Huntington.

Last year, in a show at the Sid Jacobson JCC, Crawford was one of three artists (out of 30) to win special honors.

“I was thrilled when they selected me,” she said.

The prize is the dream realized from her childhood, and the upcoming exhibition at the JCC, where her work will be on display through April 23.